Memorial Day: The lessons of the Berlin Wall 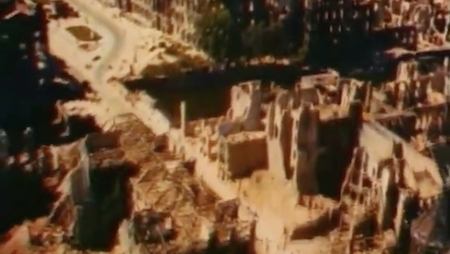 YouTube video download / Shown below, Berlin flyover after World War II - a terrible sight. Here is a screenshot of the utter devastation as shown from the flyover.

NEW SMYRNA BEACH, Fla. -- The first time I saw this video, a flyover of Berlin, immediately after Nazi Germany's surrender in World War II, I had tears in my eyes. Perhaps it was the instrumentation. The sound of the bells. The sight of the burned out buildings; a city in ruin.

On this Memorial Day, we stop to pause and remember the war dead who served America with pride and distinction; who shed their blood on foreign lands like Germany.

Whether you live here in New Smyrna Beach, Daytona Beach, Lake Mary, Titusville or Palm Coast, you no doubt will pass a cemetery adorned with American flags. Even in the cities, Orlando, Jacksonville, Tampa, Miami, you'll see the flags of the war dead in front of the tombstones.

Under every tombstone marked as a veteran of foreign war, lies the story of a man or woman who served. I even count the men and women of 9/11 -- NYPD cops and firefighters -- as those also to which paying tribute on this solemn day is more than appropriate.

But getting back to that video of the Berlin flyover, my thoughts and prayers go out to the millions of Jews exterminated by Adolf Hitler, a bastard whose NAZI philosophies about an Aryan race was nothing short of evil. They were not the only ones to suffer. So, too, did millions of Germans, especially after World War II, especially those who had either settled in occupied territories in Eastern Europe or were of German heritage and native to those lands.

Here is a Wikipedia passage that sums it up: "The largest numbers came from the former eastern territories of Germany acquired by Poland and the Soviet Union (about 7 million) and from Czechoslovakia (about 3 million). It was also the largest among all the post-war expulsions in Central and Eastern Europe, which displaced more than twenty million people in total.

"The events have been variously described as population transfer, ethnic cleansing or democide. The death toll attributable to the flight and expulsions is disputed, with estimates ranging from 500,000 to 2 million; more recent estimates are close to the lower 500,000 figure. The policy was part of the geopolitical and ethnic reconfiguration of postwar Europe; in part spoils of war, in part political changes in Europe following the war and in part recompense for atrocities and ethnic cleansings that had occurred during the war."

The suffering continued for decades with Germany split into two: West Germany and East Germany, the latter under communist rule with Stalin's iron hand from Moscow. This ushered in the Cold War.

Berlin, was divided into four quadrants, each under the control of the U.S., Great Britain, France, and of Course, the Soviet Union.

It was the communist blockage of Berlin, entirely within the East German borders, that began June 24, 1948, and lasted until May 12, 1949, that clearly defined the Cold War. The Western allies, led by the U.S. literally airlifted food and supplies to those in West Berlin.

Berliners watch a C-54 land at Berlin Tempelhof Airport, 1948, as shown in the photo shown here.

"Here is a summary description of that airlift described in a Wikipedia page: "The United States Air Force and the United Kingdom's Royal Air Force flew over 200,000 flights in one year, providing up to 4700 tons of daily necessities such as fuel and food to the Berliners. Alongside US and British personnel, the airlift involved aircrews from the Royal Australian Air Force, Royal Canadian Air Force, Royal New Zealand Air Force, and South African Air Force[4]:338. By the spring of 1949, the effort was clearly succeeding and, by April, the airlift was delivering more cargo than had previously been transported into the city by rail. The success of the Berlin Airlift brought embarrassment to the Soviets who had refused to believe it could make a difference.

"The blockade was lifted in May 1949 and resulted in the creation of two separate German states: The Federal Republic of Germany (West Germany) and the German Democratic Republic (East Germany). In remembrance of the airlift, three airports in the former western zones of the city served as the primary gateways to Germany for another fifty years."

The German suffering continued with the 1961 building of the Berlin Wall. It was built to stop the flow of East Germans crossing into West Berlin and then gaining passage to West Germany.

The wall, later called the "death strip" completely cut West Berlin from East Berlin and the rest of East Germany. Before the wall went up, 3.5 million East Germans escaped. Over the next three decades as many as 200 people were shot and killed by East German soldiers in guard towers.

For 26 years, East Berliners lived in isolation, but the first glimmer of hope came on June 12, 1987, when President Reagan in  speech commemorating the 750th anniversary of Berlin, stood at the Berlin Wall and demanded: "Mr. Gorbachev, tear down this wall."

On Nov. 9, 1989, the improbable happened and the wall came down. Berliners were again united and Gorbachev told the East German government officials they were on their own. Germany became one again and Berlin its capital as it had been before the fall of Berlin in 1945.

World War II was the deadliest of all wars with 60 million deaths, about 2.5 percent of the world's population with Germany and then-fascist Italy in the European Theater and Japan in the Asian Theater. American military casualties were 292,131.

Berlin itself was among the heaviest bombed locations in all of World War II - a city in virtual ruins as shown in a 1945 video flyover after the war in Eurpoe had ended. Loss of life in Berlin as a result of the allied bombings from 1940-1945 is 35,000 civilian casualties. The video showing the utter devastation from the flyover is just so gut wrenching.

World War II was the deadliest of all wars with 60 million deaths, about 2.5 percent of the world's population with Germany and then-fascist Italy in the European Theater and Japan in the Asian Theater. American military casualties were 292,131.

Berlin itself was among the heaviest bombed locations in all of World War II - a city in virtual ruins as shown in a 1945 video flyover after the war in Eurpoe had ended.​ Loss of life in Berlin as a result of the allied bombings from 1940-1945 is 35,000 civilian casualties. The video showing the utter devastation from the flyover is just so gut wrenching.

Today, Germany thrives under democracy with one of the strongest economies in Europe, with Berlin as a shining example of what freedom means.

On this Memorial Day, the loss of America lives in WW II was not in vain. The two greatest presidents of the 20th century -- John F. Kennedy and Ronald Reagan -- stood tall in defying the Berlin Wall and its barrier to freedom.

"Ich bin ein Berliner" "I am a Berliner" were the famous words from a June 23, 1963, visit to Berlin by JFK, protesting the wall. And of course, Reagan's challenge to the Soviet premier 24 years later, showed the will of two leaders willing to speak up for freedom.

That is what Memorial Day means to me from the haunting video of the 1945 Berlin flyover that I first came across a few days ago.

PostScript: The best way I can demonstrate what Memorial Day represents to me is the experience of the people of Berlin, from Hitler's Nazi politics and the extermination of 8-10 million Jews, to a divided Berlin with freedom on the western side and communism on the eastern side. For what came out of WWII and a divided Berlin was the Cold War. Two great presidents -- JFK and Reagan -- had the courage to stand up to the communists and their wall. American military lives lost in WWII were not in vain. And Democracy endured... Not everyone will agree with me, especially those who feel the German people deserved what they got because of the Holocaust. Today, a strong and Democratic Germany is important to the European economy and that of the free world. This is what Memorial Day is to me. The opening video on the Berlin flyover prompted me to write this. Please forgive me I have offended anyone. Yes, my last name -- Frederick -- is of German origin, but I am a second generation American of Italian and Portuguese heritage. Truth be told, my name would be Enrico di Federico III had it not been changed nearly a century earlier.
Column Posted: 2012-05-28 06:21:51
Editor's Note: This column was among three to win first place in Blog Writing in the 2012 Florida Press Club journalism contest.