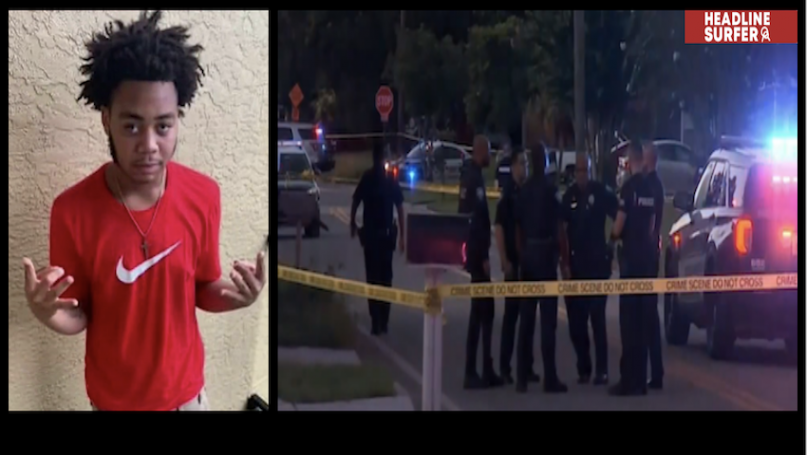 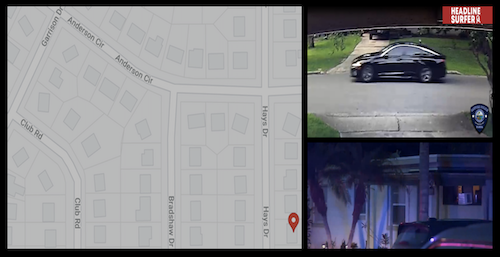 Photos for Headline Surfer / Above: Jaitoryon McNair, 16, was gunned down in front of his family's home at 209 Hays Drive, in Sanford, Florida on Aug. 12, 2021. He died a short time later at the hospital. Below: A nearby surveillance camera picked up the shooter vehicle, a 4-door black sedan, that sped off north on Hayes and then west onto Anderson Circle.

SANFORD, Fla. -- An early evening drive-by shooting back in August resulted in the death of a 16-year-old boy who was hit multiple times while standing on the patio in front of a home by gunfire from inside a 4-door sedan that sped away after the rapid gunfire, Sanford cops said.

Here is a synopsis of what occurred as described in an email media alert to Headline Surfer on Aug. 12, 2021: At 6:36 pm, Sanford Police received a 9-1-1 call reporting a shooting with injuries at 209 Hays Drive.

Responding Sanford cops discovered Jaitoryon McNair (DOB: Nov. 28, 2004) on the front patio of 209 Hays Drive suffering from multiple gunshot wounds. He was transported to Seminole County Regional Hospital in Sanford where he died a short time later as a result of his injuries.

Based on the initial investigation, it appeared numerous bullets were fired from a black, four-door sedan that was traveling north on Hays Drive. The vehicle then turned west on Anderson Circle before fleeing the area.

The victim and the shooter knew each other, according to Sanford police spokeswoman Bianca Gillett, who described it as an isolated incident.

“We are hoping somebody saw that vehicle leave the area,” Gillett said back on Aug. 13, the day after the fatal shooting, releasing a photo of the suspect vehicle.

Investigators are asking for anyone with information on this vehicle or incident to contact the Sanford Police Department or Crimeline at 800 423-TIPS (8477) or visit www.crimeline.org. Calls made to Crimeline remain anonymous, and tips to Crimeline that lead to solving homicide cases are eligible for a cash reward of up to $5,000.