73. Winter Springs Woman gets 8 years in federal pen for embezzling $1.16 million from her employer; using the dough to buy a BMW & a Porsche 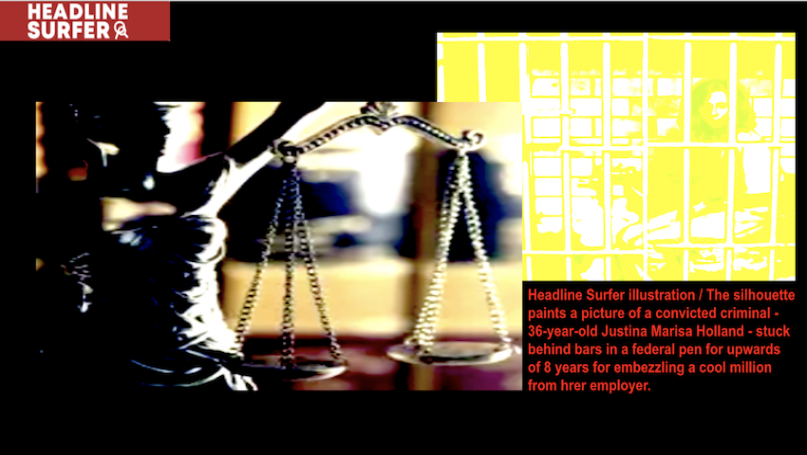 ORLANDO, Fla. -- When taking into account the cost of living, it would take the average American worker 65 years to earn a million dollars over a lifetime, based on an annual salary of $35,000 a year.

Justine Maria Holland became a millionnaire in a fraction of that time. Just three years!

Short of winning the state lottery, which didn't happen, how did the 36-year-old Winter Springs woman seemingly become an overnight millionaire? By embezzling from her employer, of course.

Holland had previously pleaded guilty to mail fraud, wire fraud, access device fraud, aggravated identity theft, false use of a Social Security number, and theft of government property, but the free reign she had in cooking the books, came to a grinding halt on Oct. 29, in a federal courtroom in Orlando when U.S. District Judge Roy B. Dalton threw the proverbial book at her - eight years in federal prison, as well as ordering her to pay $1,161,185.64 in restitution.

As she stood in front of him, she was now answering to the court as Justina Maria Rummel. Whatever name she was using, she wasn't walking out of that court on her own because the gig was up. The gig was up.

imposed sentence and she was led away in handcuffs.

Here's a synopsis of the government's case against her:

According to court documents, Holland was employed at a local business where she had access to the bank and credit accounts of the business and its owner. From March 2015 through June 2018, Holland used her position to embezzle more than $1 million from her employer and the employer’s owner. Holland’s scheme consisted of three parts:

•Second, Holland engaged in more than $700,000 of credit card fraud by making unauthorized purchases using the victim’s credit cards, which she paid by making unauthorized transfers from her employer’s various bank accounts. Holland also opened a credit card account in the victim’s name by using his Social Security number and then used that card to make more than $196,000 in purchases for herself, including visits to a local theme park. Holland used her employer’s bank accounts to pay the bills for that credit card.

• Third, Holland used her minor son’s Social Security number to obtain financing to buy a BMW and a Porsche. Holland used funds from her employer to make some of the car payments for her purchased luxury import vehicles.

• Third, Holland used her minor son’s Social Security number to obtain financing to buy a BMW and a Porsche. Holland used funds from her employer to make some of the car payments for her purchased luxury import vehicles.

Holland covered up her embezzlements by providing her employer with false spreadsheets that concealed her spending, among other things.

During the time that Holland was working at the employer and embezzling funds, she received benefits through the Supplemental Nutrition Assistance Program os SNAP, a program that supplements the food budget of needy families so they can purchase healthy food and move towards self-sufficiency.

In her applications for public SNAP assistance, Holland had the gall to falsely claim that neither she nor her husband had earned income of any kind.

From May 2012 to August 2016, Holland received more than $23,000 in SNAP benefits. She would not have received any of those benefits had she not made those misrepresentations about her financial situation.

This case was investigated by the Federal Bureau of Investigation, the Seminole Financial Crimes Task Force, the U.S. Department of Agriculture, the Office of Inspector General, and the Florida Department of Financial Services, Division of Public Assistance Fraud.

t was prosecuted by Assistant United States Attorneys Roger B. Handberg and Terry B. Livanos.

Until 2008, SNAP was known as the Food Stamp Program. SNAP is a federally funded, national program established by the United States Department of Agriculture and administered in Florida by the Florida Department of Children and Families, more commonly known as DCF.