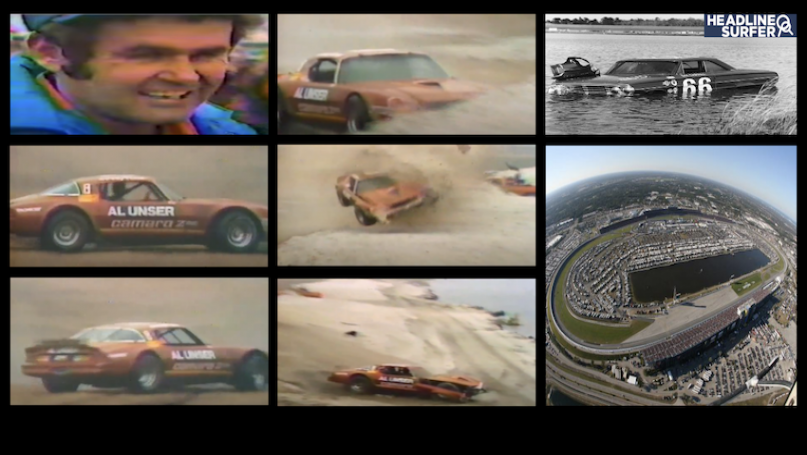 Headline Surfer photo illustration / Above: A series of screenshots showing Al Unser Sr.'s crash in the 1978 IROC race at Daytona where he nearly crash-landed into Lake Lloyd and a vintage B&W pic of Ray Darnell doing just that in a 1964 qualifying race for that year's ARCO 250 (credit: photo by ISC Images & Archives via Getty Images) / Below: YouTube embedding / Al Unser Sr's wreck in the 1978 IROC race at Daytona from which the screenshots above were taken.

DAYTONA BEACH, Fla. -- "Go jump in a lake" certainly wasn't what car racing legend Al Unser Sr. was thinking after he skidded off the track at Daytona International Speedway during a 1978 IROC race, hit a berm, and went airborne before a belly-flop landing that destroyed the car.

Unser nearly cartwheeled into Lake Lloyd when he got caught up in a multi-car accident involving Gordon Johncock, a two-time Indy 500 winner.

But lady luck was on Unser's side that afternoon at the World Center of Racing -- his crumpled Camaro landing mere yards shy of bellyflopping into the cavernous Lake Loyd near the edge of the infield between near turn 3 of the 2.5-mile superspeedway.

But lady luck was on Unser's side that afternoon at the World Center of Racing -- his crumpled Camaro landing mere yards shy of bellyflopping into the cavernous Lake Loyd near the edge of the infield between near turn 3 of the 2.5-mile superspeedway.

Perhaps a big splash landing in the lake would have been catastrophic for one of the racing's greatest legends in a generation. But lady luck apparently was Unser's passenger that day and he walked away from the crash. After all, two drivers competing in races at Daytona in the early years at the track had crashed-landed into the infield lake and a third since Unser's near lake mishap in 1994. Fortunately, none of those drivers were killed.

Unser ended up winning the IROC race at Daytona in 1986, among a handful of stock car races, though he did finish fourth in the 1969 Daytona 500, his only entry in the Great American Race. He also was on the winning team in the 1985 running of the 24 Hours of Daytona (sports car endurance race), now known as the Rolex 24 at Daytona.

Al Unser Sr., who died on Dec. 9, 2021, at age 82, after battling cancer for 17 years, is included in this Top 100 countdown for his big crash at Daytona. Its certainly not the biggest event on a race track; more like a foootnote in the racing legend's resume.

In terms of individual greatness, Al Unser Sr. has led the most laps of any driver in the history of the Indianapolis 500, at 644. Unser tied Ralph DePalma's long-standing record of 612 laps led on the last lap of his fourth Indy 500 victory.

Unser holds the record of being the oldest driver to ever win the Indy 500 at 47 years old (1987), breaking the previous record set by his brother Bobby.

Unser was the 1978 IROC champion. He also competed in the 1968 Daytona 500  (finishing in fourth) and four other NASCAR Winston Cup & Grand National races, all held on road courses with this best showing being fourth place twice.

YouTube embedding / CodyHGaming video / 1964 Daytona ARCA 250 Bay Darnell Lake Lloyd Crash | NR2003 Reenactment: Since there is no known footage of the wreck in the 1964 Daytona ARCA 250, the YouTuber here instead used what information and photos were available and set up a scenario of what the wreck might have looked like.

Fast Facts:
Dave Stacy, then a 29-year-old NASCAR Goody's Dash Series driver, crashed in the Florida 200 at Daytona in February 1994 and his Ford ended up in Lake Lloyd in the DIS infield. Stacy was the last driver to this day to crash into the lake since the 2.5- mile speedway was opened in February 1959. Tommy Irwin crashed into the lake in the 1960 100-Mile Twin Qualifying Race for the Daytona 500, and Bay Darnell, who crashed into the lake in a qualifying race prior to the ARCA 250 in 1964, were the others. All three survived. Source: UPI Archives.
Did You Know:
The 29-acre Lake Lloyd was named for J. Saxton Lloyd, a Daytona community leader and friend of NASCAR founder Bill France Sr. He owned Lloyd Buick Cadillac and was instrumental in getting the track built. Construction crews created the lake in1958 by excavating dirt to form the banks in turns 1-2 and 3-4. The Speedway opened in 1959 for the inaugural running of the Daytona 500 won by Lee Petty, father of Richard Petty, a 7-time Daytona 500 winner. Source: DIS website.