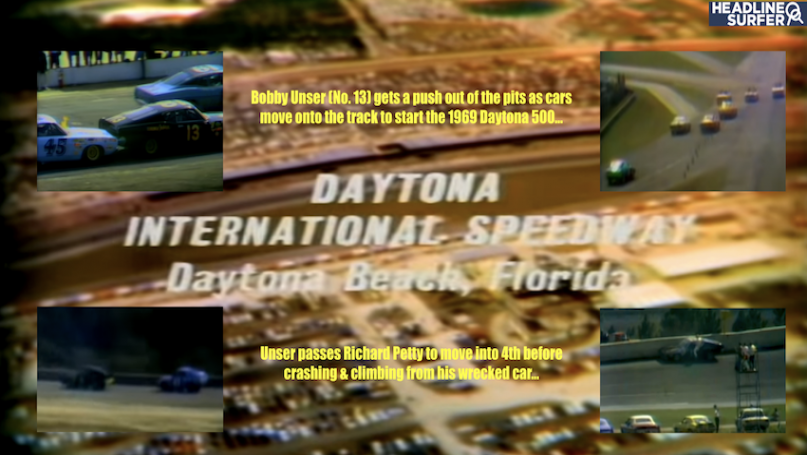 DAYTONA BEACH, Fla. -- Retired open-wheel motorsports driver Bobby Unser once said in part in a tweet, "if anything is worth it, it won't come easy."

Certainly, that was the case back in 1969, when the oldest of the Unser Brothers and three-time winner of the Indianapolis 500, qualified fourth for the 1969 Daytona 500, but couldn't get his No. 13 Ford started and had to be pushed by another driver at the start.

And though Unser, then the 1968 Indy 500 champion, moved up quickly on the high banks of Daytona and actually took the lead at lap 47 from Buddy Baker before losing it back to Baker in the next lap. Eight laps later, Unser, brushed the outside concrete retaining wall, and just like that -- climbed out of his wrecked car -- he was out of the Great American Race.

YouTube download / NascarAllOut video / ABC Wide World of Sports abbreviated coverage of the 1969 Daytona 500 won by LeeRoy Yarbrough. Bobby Unser, then-winner of the Indianapolis 500 in 1968, started fourth in this Daytona 500, driving the No. 13 Ford for Smokey Yunick Racing. Unser briefly led the race on lap 47, for one lap, but eight laps later slammed into the outside retaining wall and was knocked out of the race.

And though Bobby Unser, then the 1968 Indy 500 champion, moved up quickly on the high banks of Daytona and actually took the lead at lap 47 from Buddy Baker before losing it back to Baker in the next lap. Eight laps later, Unser, brushed the outside concrete retaining wall, and just like that -- climbed out of his wrecked car -- he was out of the Great American Race.

Bobby Unser died Sunday, May 3 of natural causes at his home in Albuquerque, NM. He was 87 years old.

Unser was a legend at Indianapolis Motor Speedway for decades in open-wheel racing, known as IndyCar. In fact, three members of the Unser racing family won a combined nine Indianapolis 500 championships:

Bobby Unser only raced a handful of times in NASCAR, the biggest being the 1969 Daytona 500 at Daytona International Speedway driving for Smokey Yunick Racing.

Al Unser also saw limited racing at Daytona back in the day, though he had three top-10 finishes in NASCAR.

Sadly, the Unser brothers have both passed. Al Unser Sr. died on Dec. 9, at age 82, losing a 17-year battle with cancer.

DID YOU KNOW? Bobby Unser was afraid of heights. But he conquered that fear to capture the Pikes Peak climb a record 13 times, racing against the clock on a gravel road twisting through more than 150 turns with no guardrails overlooking drops of up to 1,000 feet. The previous Pikes Peak record of nine victories had been held by his uncle Louis. Source: NY Times.
Editor's Note: Al Unser Sr. is featured next in the Top 100 countdown.