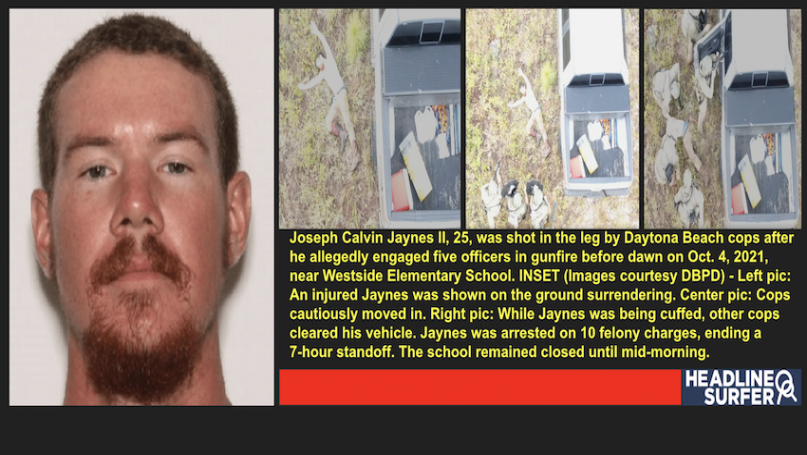 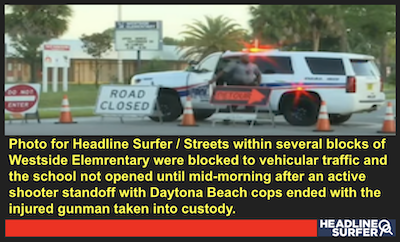 DAYTONA BEACH, Fla. -- A 25-year-old man was shot in the leg back in early October after firing at cops who were conducting an overnight patrol near Westside Elementary School.

Westside Elementary’s school day was delayed until the standoff was resolved. Several roads in the area were also closed for public safety reasons.

Here is a synopsis of what occurred on Monday, Oct. 4, according to an email media from Daytona Beach Police PIO Messod Bendayan and follow-up reporting by the award-winning media outlet: Jaynes’ leg wound came while exchanging gunfire with five officers that he allegedly initiated by firing at them first. None of those cops were hurt.

Officers were doing extra patrols around 12:30 a.m. within several blocks of Westlake Elementary School when they spotted an open garage door in the 1600 block of Piccadilly Drive.

While looking into that, they heard a single gunshot to the east of that location. When they went to investigate, more shots were fired at them from a man – since identified as Jaynes – who was walking around the backyards of homes in that area, leading to those officers opening fire.

Jaynes retreated into a nearby wooded area, where he remained for several hours before firing more shots at officers.

Soon afterward, the suspect crawled into a truck parked near a canal located close to the intersection of Laurel Drive & 6th Street and called 9-1-1 just after 4 a.m., saying that he had a leg injury and needed help.

Officers and dispatchers attempted to talk to Jaynes numerous times on the phone, but he kept hanging up, making communication difficult. He was also calling family members during that time.

The suspect crawled out of the truck around 6 a.m. and laid on the ground near one of the rear tires. Officers eventually took him into custody once it was determined that he was no longer a threat to anyone still on the scene.

Prior to this incident, DBPD officers were called out to the neighborhood several times over the weekend to handle arguments between Jaynes and a roommate of his.

Daytona Beach police were called out to the neighborhood on Piccadilly Drive where Jaynes resides several times over that weekend leading to between Jaynes and a roommate, eventually leading to shots being fired across the street and striking the exterior of a couple of homes just before12:30 a.m. on the fourth of October.

That's when responding cops spotted an open garage door. While looking into that, they heard a single gunshot to the east of that location where Jaynes lives. After several more shots were fired, cops followed Jaynes into a wooded area where he fired directly upon them, police said, leading to a gun battle with the suspect from a distance getting shot in the leg.

"He was armed with a rifle which also had a flashlight attached to it, they ordered him to drop the weapon, he refused to drop the weapon, he actually pointed it at them, at which time we exchanged gunfire with him. I can't tell you how many shots were fired. He was shot one time in the right leg," Daytona Beach Police Chief Jakari Young said.

"He was armed with a rifle which also had a flashlight attached to it, they ordered him to drop the weapon, he refused to drop the weapon, he actually pointed it at them, at which time we exchanged gunfire with him. I can't tell you how many shots were fired. He was shot one time in the right leg," Daytona Beach Police Chief Jakari Young said.

Over the next few hours, Jaynes called 9-1-1, saying he had a leg injury and needed help. A Daytona Beach police hostage negotiator tried repeatedly to get Jaynes on his phone, but he ignored the calls and instead made a series of calls with relatives for several hours, police later learned.

Finally, after seven hours, SWAT personnel moved in and took him into custody without further incident and then had him transported to Halifax where he underwent emergency surgery for his badly wounded leg.

"Luckily that time of the morning, few people were out, but bullets don't have names on them, so when we're shooting like that, (there's always a chance someone could be hurt," Young told TV news camera crews and other local media outlets, near the vicinity of Westside Elementary, explaining why the nearby streets were blocked off.

The school remained closed until mid-morning - families alerted in reverse 9-1-1 mass call messaging alert hours before the scheduled opening of school that there was an active shooter situation nearby and a follow-up reverse after the standoff finally ended with the suspected wounded gunman Jaynes in police custody.

Jaynes was charged with 10 felony counts of aggravated assault on a law enforcement officer.

Daytona Beach cops were assisted on the scene during the 7-hour standoff by deputies with the Volusia and Orange County Sheriff's offices as well as cops with the nearby Holly Hill PD. 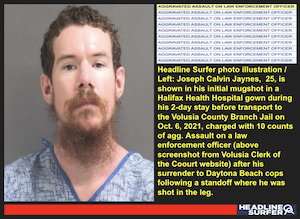 Joseph Calvin Jaynes II has remained incarcerated at the Volusia County Branch Jail for nearly three months since his brief stay at Halifax Health Hospital for a leg wound after allegedly initially a gun battle with cops back on Oct. 4 leading to his arrest.

Jaynes, charged with 10 counts of aggravated assault on law enforcement, is scheduled for a pre-trial hearing on Jan. 22 in Circuit Judge Raul Zambrano's courtroom at the Justice Center in Daytona Beach.

He was initially provided a public defender at his first appearance and arraignment but has since obtained the services of Jeffery Higgins, a private criminal defense attorney in Daytona Beach.

Facing a minimum-mandatory of three years behind bars on each aggravated assault count on a law enforcement officer, Jaynes could be locked up in state prison for upwards of 30 years, if convicted of the second-degree felony counts in court.