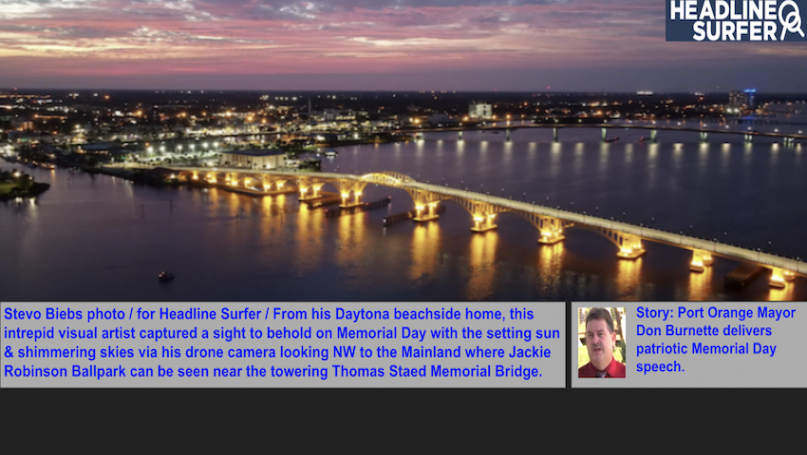 DAYTONA BEACH, Fla. -- Memorial Day was three days in the rear window of time as this tourism-starved mecca remains etched in the thoughts of locals and day-trippers alike.

Etched in the thoughts of politicians and merchants alike as Daytona, the eastern-most end of the I-4 corridor and an hour's drive from the largest tourism-mecca on the planet  - Orlando, with Disney and the Attractions.

And perhaps as the grip of the deadly COVID-19 pandemic has finally begun to ease in earnest with Memorial Day weekend - so packed with people that cops had to shut down the bridges to ease the traffic congestion for those headed to the World's Most Famous Beach for sun, sand and the curling waves.

And even with the beach bikini and surfer enthusiasts delighting in the fun in the sun, there were elected municipal leaders who fulfilled their patriotic duties of respect and humility for those who have sacrificed their lives in military service to their country.

For it was in remembrance of country and honor that individuals like Port Orange Mayor Don Burnette showed through virtue and respect what real leaders say and do on a sacred national holiday like Memorial Day, despite the partisan pettiness in Washington and the continuation of the Big Lie along with the hypocrisy of those who cower and cater to Donald Trump, who in the days following this national holiday is ramping up conspiracy theories of being reinstated to the presidency as early as August.

And ironically when disgraced felon Joel Greenberg is set to be sentenced; paving the way for the expected trial of the century of Congressman Matt Gaetz, the defiant Republican whose smirk remains his trademark.

But this story is about what was and could be for greater Daytona emerging from the pandemic during a holiday when no truer words were spoken than during the Memorial Day Ceremony at the Port Orange City Center:

"We owe it to those that gave all for our freedom," Mayor Burnette said, his head bowed in respect for the fallen, adding, "That comes with an obligation to serve each other and live our lives in a manner that honors their sacrifices."

This was not about Burnette or his personal politics.

This was vintage Don Burnette, part-time mayor, husband, father and small business owner giving back to the community he has so admirably led by example for a decade now, first half as an elected commissioner and the latter as mayor.

Burnette's message was not lost on city resident John R Cameron Jr, who thanked the mayor in a post on his Facebook page for his passion and message being "right on."

"Be thankful and be appreciative for the sacrifice of others and your duty is to pay that forward," was Cameron's read on Burnette's theme.

And what better encouragement for better times in family-oriented Port Orange where Burnette and wife, Elizabeth, herself new to elected service with a seat on the Volusia County School Board, where the married couple raised their two sons to young adulthood.