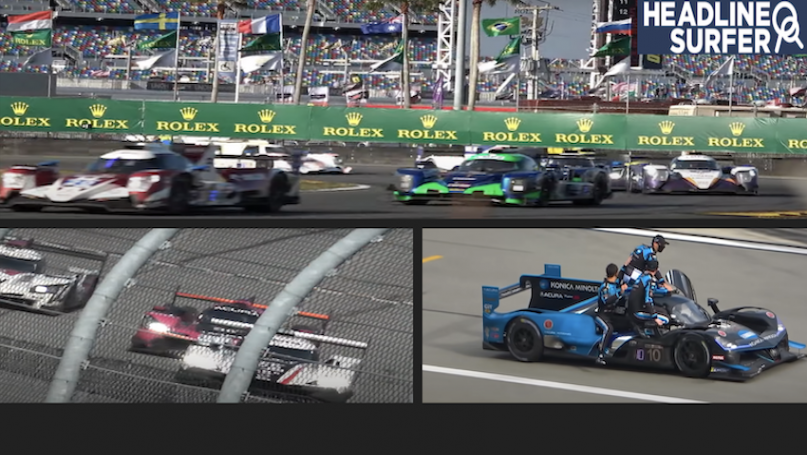 Photos for Headline Surfer / Left: Wayne Taylor Racing takes the checkered flag to win the 2021 Rolex 24 at Daytona. Above: Winning teammates hop on the car to celebrate.

DAYTONA BEACH, Fla. -- Filipe Albuquerque drove the Wayne Taylor No. 10 Acura DPi to victory in the 2021 Rolex 24 Hours of Daytona by a margin of 4.704 seconds on Sunday at Daytona International Speedway .

The Jan. 31 win was the third consecutive for Wayne Taylor Racing at the Rolex 24.

Albuquerque took the checkered flag with seconds to spare over Kamui Kobayashi in the No. 48 Ally Cadillac, followed by Harry Tincknell in the No. 55 Mazda and Juan Pablo Montoya (2000 & 2015 Indy 500 winner) in the No. 60 Acura of Meyer Shank Racing.

Albuquerque watched in his mirrors and heard his team’s reaction over the radio Sunday when Renger van der Zande was forced to pit with a flat right rear tire with seven minutes and 50 seconds left in the race, allowing Albuquerque to sail to victory in the 59th Rolex 24 at Daytona International Speedway. The historic race opened the 2021 IMSA WeatherTech SportsCar Championship season.

Albuquerque drove the No. 10 Konica Minolta Acura ARX-05 DPi to the finish line 4.704 seconds ahead of the No. 48 Action Express Racing/Ally Cadillac DPi-V.R driven by Kamui Kobayashi.

Wayne Taylor Racing joined Chip Ganassi Racing as the only teams to score three consecutive overall victories in the Rolex 24. The Ganassi team went back-to-back-to-back from 2006-08.

In addition to three consecutive wins in a row, Wayne Taylor Racing also won two earlier Rolex 24 races in the past half dozen years.

“So much went into this,” said Ricky Taylor, who scored the second overall Rolex victory of his career. “It was definitely a test of trust and a testament to preparation and sticking to a plan. … We skipped all of the offseason testing because the guys needed time to do everything properly. They know how to win this race. I feel like we were all lucky to be a part of it.”

“So much went into this,” said Ricky Taylor, who scored the second overall Rolex victory of his career. “It was definitely a test of trust and a testament to preparation and sticking to a plan. … We skipped all of the offseason testing because the guys needed time to do everything properly. They know how to win this race. I feel like we were all lucky to be a part of it.”

Renger van der Zande – who drove and won the Rolex 24 for WTR the past two years – was pressuring Albuquerque and at times closing in sharply during the final minutes of the race before he cut right-rear tire on his No. 01 Cadillac Chip Ganassi Racing Cadillac DPi-VR in the last of 12 turns on the Daytona road course.

“He nearly passed me, but then he was kind of steady for four of five laps,” Albuquerque said. “He was not really getting in there. I was just counting. ‘One more lap. One more lap in the lead.’ When he blew, we were lucky. But there is nobody who has ever won Daytona or any championship without luck.”

The Ganassi crew replaced the tire on the No. 01 car, but – without time to catch the field – van der Zande and his teammates had to settle for a fifth-place finish.

In the Le Mans Prototype 2 (LMP2) class, Paul-Loup Chatin put the finishing touches on a 19.513-second victory by the No. 18 Era Motorsport ORECA LMP2 07 over the No. 8 Tower Motorsport ORECA co-driven by John Farano, Gabriel Aubry, Tim Buret, and Matthieu Vaxiviere.

Chatin co-drove the No. 18 with Ryan Dalziel, Dwight Merriman, and Kyle Tilley.

“It’s amazing,” Merriman said. “I’m really proud of the team. It really is a team effort to win in endurance racing, especially when you get to these super-long ones. It’s just so hard to win, even if you’re good. It requires all aspects of the program to be good.”

Spencer Pigot drove the final stint of a three-lap victory in the Le Mans Prototype 3 (LMP3) class by the No. 74 Riley Motorsports Ligier JS P320 he shared with Gar Robinson, Scott Andrews, and Oliver Askew. LMP3 was making its WeatherTech Championship debut, and the cars were racing for 24 hours for the first time.

“It was a pretty smooth race, to be honest,” Pigot said. “We kind of stayed out of trouble and did our own thing. That was our plan all along. Nobody knew how reliable these LMP3 cars would be. I don’t think they’d ever run a race this long. One thing we knew is that we’d have the best-prepared car in the paddock, and I think we showed that today.”

The No. 10 Konica Minolta Acura in DPi, the No. 8 Tower Motorsport entry in LMP2, and the No. 74 Riley Motorsports LMP3 scored the most points in IMSA Michelin Endurance Cup competition, which pays points at regular junctures of the WeatherTech championship’s four endurance races: Rolex 24, Mobil 1 Twelve Hours of Sebring Presented by Advance Auto Parts, Sahlen’s Six Hours of the Glen, and Motul Petit Le Mans.