Credit/YouTube embedding of a WWE video/Sasha Banks as honorary starter for the 2021 Daytona 500.

WWE Superstar Sasha Banks served as the honorary starter for the 63rd running of NASCAR'S signature stock car race -- the Daytona 500 on Feb. 14.

In true Boss Time fashion, the 44 drivers were fixated on that shiny green flag (and no doubt her curvy figure), Banks waved that flag, the cue for the drivers to put their pedals to the medal deafening roar of Ford Mustangs, Chevy Camaros, and Toyota Celicas passing by like a blur.

Banks said the half-minute or so on the raised starter's platform -- high above the cars blazing by under it and her -- was a bit unnerving in front of the rabid NASCAR fans in the grandstands, despite the fact crowd attendance was limited to 30,000 due to COVID-19 protocols (as opposed to seating for 100,000 strong). But Banks didn't flinch on the outside, reinforcing her wrestling moniker as a ‘Legit Boss.'

“I’m a little shook, but I’m really excited," Banks said after relinquishing the green flag to the regular flagman. "This is really crazy, I haven’t felt this much energy in forever. That adrenaline… You have to be here, it's so loud, it was so wild!" 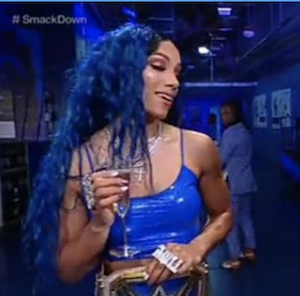 “I’m a little shook, but I’m really excited," Banks said after relinquishing the green flag to the regular flagman. "This is really crazy, I haven’t felt this much energy in forever. That adrenaline… You have to be here, it's so loud, it was so wild!"

What an ambassador Banks played on behalf of the WWE and its partners at FOX as well as NASCAR.

After all, she's one of the top women superstars for the Smackdown brand, showcased Fridays on Friday Night Smackdown and broadcast on Fox, which also covers the Great American Race.

Sasha Banks is a pioneer of the WWE Women’s Division, having continuously broken down barriers and shattered glass ceilings and helping usher in WWE’s current Women’s Evolution. Consider: She is a former NXT women’s Champion, a multi-time Raw women’s champion, and one-half of the first-ever WWE Women’s Tag Team Champions.

Speedway officials were thrilled Banks took on the honorary flag-waving starter's role in waving the green flag - not only for the drivers on the track but also for the diehard racing fans in the seat and many more tuned in at home.

“The tradition of having high-profile athletes, including those from WWE, as part of the Great American Race continues this year with Sasha Banks as our honorary starter, and we couldn’t be more excited,” Wile said, adding of Banks, “She is a true champion."

Daytona International Speedway has an even longer history of pro athletes in other sports involved in official capacities at the Daytona 500, dating back to 1977 when then-Oakland Raiders quarterback Ken Stabler (RIP) was the honorary starter.

Editor's Note: There are lots of racing-related story segments ahead, including, but not limited to the actual Daytona 500 race.