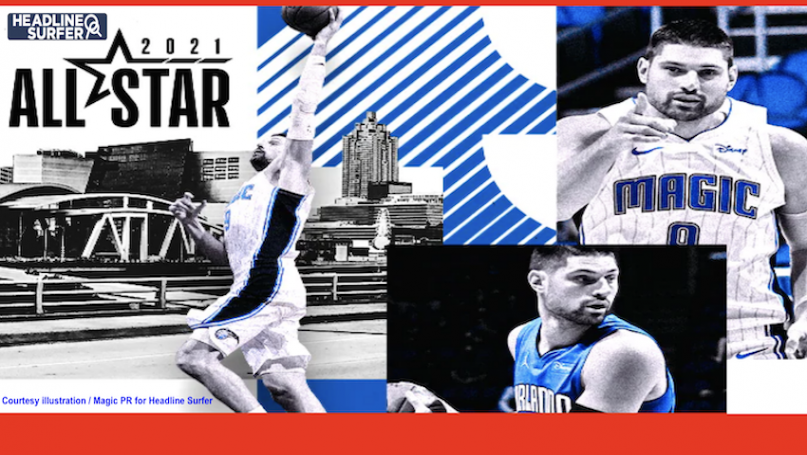 It was Team LeBron vs. Team Durant in the 70th NBA All-Star Game at the State Farm Arena in Atlanta (8 pm ET Sunday, March 8, and shown live on TNT).

Vucevic, the 6-foot-11 center, was a reserve on Kevin Durant's squad.

This marked the second time that Vučević had been selected as an NBA All-Star during his career. He also earned NBA All-Star honors in 2019. Vucevic became the sixth player to be named an NBA All-Star multiple times while wearing a Magic uniform, joining Shaquille O’Neal, Anfernee Hardaway, Tracy McGrady, Grant Hill, and Dwight Howard.

Vucevic also led (or tied) the Magic in scoring 20 times, in rebounding 23 times, and in assists seven times. He has scored in double figures in all 31 games, had 20-plus points 21 times, 30-plus points seven times, and 40-plus points twice, including a career-high 43 points on Feb. 5 vs. Chicago. He has also recorded a team-high 22 double-doubles. As of Feb. 23, he is tied for third in the NBA in double-doubles, ranks sixth in rebounding, 18th in scoring, and tied for 30th in minutes played.

Kevin Durant of the New Jersey Nets was joined by teammate and guard Kyrie Irving, drafted by Durant with the second overall pick in the NBA All-Star Draft. In addition to Irving, Durant selected 76ers center Joel Embiid, Clippers forward Kawhi Leonard, Washington Wizards guard Bradley Beal and Celtics forward Jayson Tatum as starters.Tatum, voted to the NBA All-Star Game as a reserve, was drafted with the starters as a replacement for Durant, who was unable to play in the game.

The exhibition game was originally scheduled to be held in Indianapolis, but it was relocated to Atlanta after schedule changes due to the COVID-19 pandemic.

Team Lebron won the 2020-21 NBA All-Star Game, 170 to 150 over Team Durant on March 7, at State Farm Arena in Atlanta, home of the Atlanta Hawks. Giannis Antetokounmpo of Team LeBron was named the All-Star Game Most Valuable Player. Nikola Vucevic scored 5 points off the bench for Team Durant. He also had 7 rebounds, a steal and an assist in 13 minutes of play.

Less than three weeks after the ALL-Star contest, the Bulls shipped out Wendell Carter Jr., Otto Porter Jr. and top-four protected first-round picks in 2021 and 2023 in exchange for Magic players Vucevic and Al-Farouq Aminu in a March 25 NBA Deadline trade. Two other key Magic payers were jettisoned in separate trades: Aaron Gordon to Denver and Evan Fournier to Boston. These and other developments with the Magic in 2021 will be featured later in this Headline Surfer Top 100 countdown.