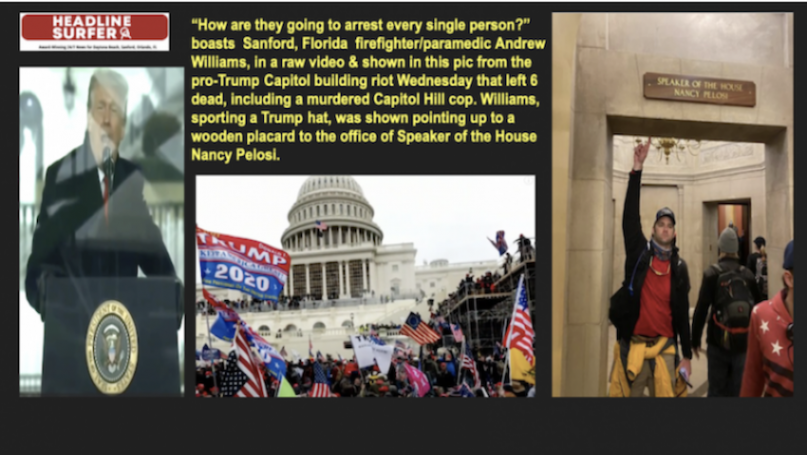 ORLANDO, Fla. -- The Sanford firefighter amid hundreds who took part in last week's deadly pro-Trump siege of the Capitol was arrested today on a federal warrant by the FBI at his Maitland residence, where he was handcuffed, shackled, and transported to US District Court before a judge who ordered him released on a conditional bond.

As of January 12, 2021, Sanford Firefighter/Paramedic, Andrew Williams, has been placed on Administrative Leave without pay pending the results of the current administrative and criminal investigations.

On the morning of January 7, 2021, the Sanford Fire Department was made aware of information regarding the possibility of a Sanford Firefighter’s involvement in events that took place on January 6, 2021, at the U.S. Capitol Building in Washington, D.C.  Along with the information, a photograph was submitted that depicts a male, identified as Andrew Williams.

The picture appears to show Williams inside the Capitol Building during the unlawful entry made by protesters.

On January 7, 2021, Williams was placed on Administrative Leave with pay.

On January 12, 2021, Sanford Fire Department was notified by the Federal Bureau of Investigations that they had arrested and charged Andrew Williams with one count of Unlawful Entry of a Restricted Building and one count of Disorderly Conduct on Capitol Grounds.  As Williams has now been arrested, he will be placed on leave without pay and the administrative investigation is suspended pending the conclusion of the federal criminal investigation.

On January 12, 2021, Sanford Fire Department was notified by the Federal Bureau of Investigations that they had arrested and charged Andrew Williams (shown above) with one count of Unlawful Entry of a Restricted Building and one count of Disorderly Conduct on Capitol Grounds.  As Williams has now been arrested, he will be placed on leave without pay and the administrative investigation is suspended pending the conclusion of the federal criminal investigation.

Sanford Fire Chief Craig Radzak said regarding the investigation, “We hold the men and women in this department to the highest standards. It saddens me that the actions of one individual have tarnished the hard work and dedication that the rest of the department puts forth on a daily basis. Our investigation will continue in conjunction with the current federal criminal investigation."

Radzak continued, "As is policy with any type of policy violation, including a criminal violation, an internal administrative process must be followed in order to ensure a thorough investigation with a just conclusion. I ask for the public’s patience as we move through this process.”