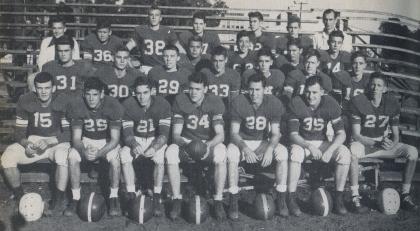 Editor's Note: One week after the New Smyrna Beach 'Cudas finished the 2008 football season with a convincing 21-13 victory over the DeLand Bulldogs, Peter Mallory, a member of the 1952 squad that triumphed in the miracle on the gridiron, was so thrilled by what the 21st-century team had done against their playoff-bound opponents that he was inspired to write this story:

The one thing you had to admire about first year Coach Pete Maman was that he showed absolutely no signs of the panic and despair that must have gripped him as he looked out over the practice field. No matter how many times he counted heads he could only find 12 candidates who had shown up for his first August practice session at New Smyrna High School in 1952. I was among them.

After doing a few calisthenics, with a calm voice, he asked some of the players,” How many more do you think will show up in the next two weeks?”

Bill Carr, Bob Paddon and Toby Norman and Claude Swindell said that some would show up after school started as they had to come from Oak Hill or had summer jobs.

Somehow we managed to dress out about 20 players for the first two games which we lost by margins that were not too bad. Then the almost unthinkable happened: The athletic department scheduled JacksonvilleTech, which we walloped, 32-0. The improbable win triggered our greatest moment -- a victory that would not be repeated that season. This was our Super Bowl, long before the NFL variety took root.

The next Friday night through a series of unbelievable events, we managed to be ahead of the mighty Winter Park Wildcats, 14-12, with about a minute left in the game. At that point we managed to fumble the ball into our own end zone and they fell on it.

With about a minute left we managed to move the ball down the field, but time ran out. For the first time in memory a major opponent was glad to see the game end instead of us. They say that there is no such thing as a moral victory, but this surely was for us. It showed that we could play with the big boys and we all felt pretty good about it.

The season struggled on.

At many practices, only 10 to 12 players showed up so we had to practice the left side of the line against the right side. On game night we still dressed out about 20 players. I don’t know exactly where they came from as there were a few I didn’t recognize.

When it came time to play Sanford, there were few uninjured players left so anybody who could stand had a chance to play.

At this point, senior Noel Silvers got to start a game. He gave an inspired performance. He ran, blocked and tackled like a man possessed . We were all astounded by his performance. Noel’s amazing performance didn’t make too much difference in the outcome of the game, but it had a profound effect on him.

From that day on, his attitude towards himself and his classmates attitude toward him went up several quantum levels. Noel went on to marry his high school sweetheart and have a career as a welder, which he said was very enjoyable and fulfilling as well as paying well. He got to travel around the country, which he really enjoyed The season ended with a close loss to Seabreeze.

The team took out its frustration on the opposition with some hard hitting. Seabreeze appeared happy when the game was over.

When the season was over, all of us -- players, coaches, parents and fans -- were no doubt relieved.

There were some differences in football between then and now.

For instance, there were no scoreboards to tell you how much time was left. It was believed that you shouldn’t drink water during practice or a game. We had a live scrimmage almost every practice day except the day before a game.

Naturally, the equipment wasn’t as good as at present although we had replaced the leather helmets about two years earlier. In retrospect in the face of such ignorance about water and contact, it was a miracle we finished out the season.

# Bill Carr got a doctorate in zoology and became a full professor of zoology at the University of Florida . # Leigh Davis graduated from Georgia Tech and became a naval officer and SEAL. He then had a career as a medical detail man for a large drug company. # Ronny Hanna graduated from Georgia Tech, became a naval aviator and was an instructor at Top Gun. He then went on to be the chief pilot for training and operations at American Airlines. He is mentioned in the Who’s Who of Aviation. # Bill Johnson had a career in acting.

# Tommy Crawford earned a master's degree from Ohio State University and was in charge of the electronics for the Endeavor space shuttle at the time of his sudden passing.

# Bob Paddon was a career forester.

# Your's truly has a BS and MS degree from MIT and had a long and fun-filled career in electrical engineering as well as being a former New Smyrna Beach Utilities commissioner, a present board member for Daytona State College and a principal in NSBNEWS.net.

In preparing this article, I talked at length with Dr. Carr. First he wondered why I was writing an article about such a bad and miserable season. However, after a day’s reflection, he proceeded to send me an e-mail about some the lessons he had learned from that season that had benefited him so much in the rest of his life.

Dr. Carr went on at length about how a touchdown pass he dropped in the Seabreeze game made him a better person. He said that from that time on he never took any sports play or anything he did in his professional life for granted. He swears that play helped him for the rest of his life.

Looking back on the whole experience after more than half a century gives the impression that while the season itself was dismal, it had very beneficial effects for all of us who participated. I hope that the present generation of New Smyrna football players, their friends, families and fans, will enjoy and gain perspective from our season of '52.