NEW SMYRNA BEACH, Fla. -- A masked robber was shot and killed by a security guard just before 10:15 at the Medicine Shoppe, at 653 N. Dixie Freeway, after he stuck a gun in the face of the pharmacist and demanded drugs, New Smyrna Beach police confirmed.

Brouillette declined to say what type of drugs were involved. 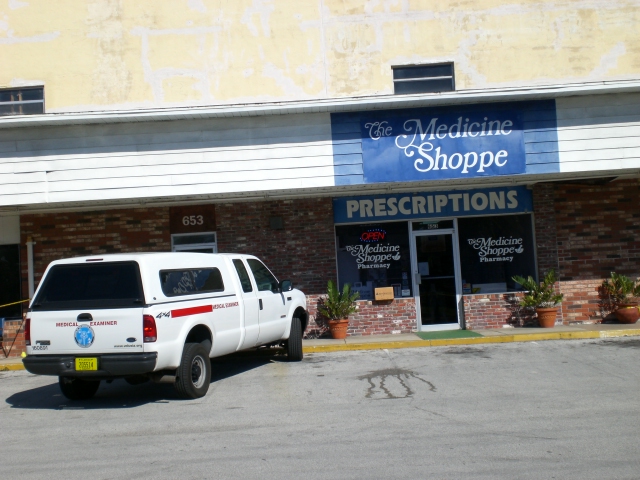 After pointing the gun the security guard fired one shot, striking the robber in the chest area.

Police arrived at the scene at 10:16 a.m. and were being assisted by the Florida Department of Law Enforcement.

This was the third time in three years, this particular pharmacy was robbed, according to police reports.

Brouillette later released a press release, which stated in part: "At 1016 hours, New Smyrna Beach Police responded to the “Medicine Shoppe”, 653 N. Dixie Freeway after receiving a 911 call in reference to an armed robbery with shots fired. Upon arrival, Officers secured the crime scene and their initial investigation revealed that an unidentified white male suspect entered the pharmacy wearing a mask, pulled out a gun and demanded drugs from the on-duty pharmacist. Immediately thereafter, an armed security guard, employed by the pharmacy, took action and shot the armed suspect. Attempts to revive the suspect were unsuccessful. The identity of the suspect is not known at this time. The identity of the security guard will be released subsequent to additional investigation. The New Smyrna Beach Police Department, the 7th Judicial Circuit Homicide Investigative Unit (HIU) and the Florida Department of Law Enforcement (FDLE) are investigating the shooting. The 'Medicine Shoppe' was previously robbed on two other occasions, once on May 4, 2006, and again on April 3, 2007."

Police remained at the scene well into the afternoon and several other businesses in the small plaza on the east side of U.S. closed up shop shortly after the shooting.

The fatal shooting is the latest in a series of crimes that have plagued New Smyrna Beach in the last few weeks, including an armed carjacking of two teen girls, an armed robbery of a store, two teens involved in a high-spred chase with police in a stolen SUV, an earlier armed robbery of a pharmacy in a food store, a man beaten with a sawed-off shotgun during a robbery attempt and a man charged with breaking into a bunch of cars.

EDITOR'S NOTE: Here are some of the follow-up stories on the fatal shooting. 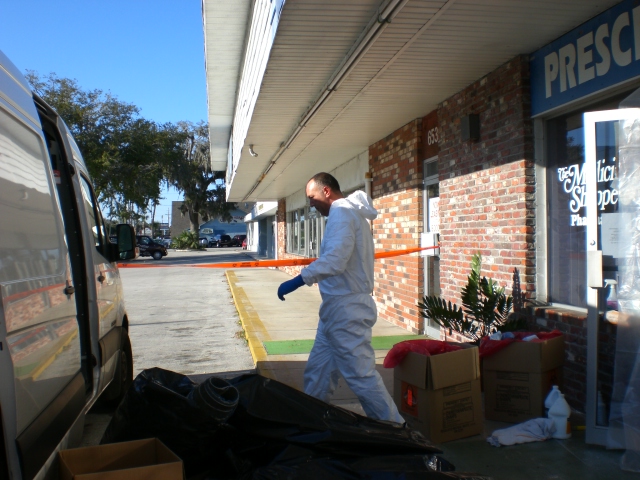 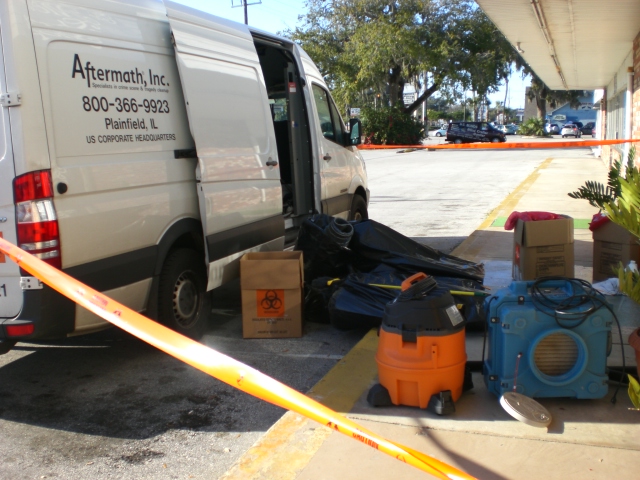 ie Freeway, a two-person crew was applying fresh brown paint to the building.

Just up the street, another crew was removing blood-soaked carpeting from the inside of the Medicine Shoppe in the wake of Saturday's fatal shooting of an armed robber by a private security guard in plainclothes hired by the pharmacy after he pointed a gun at the pharmacist while demanding drugs.

"Unbelievable," one of the painters at the Hill Brothers said of the homicide.

A professional clean-up crew that specializes in homicides, suicides and other such potentially messy situations was brought in Sunday to remove blood-stained carpets and blood splatter eleswhere in the Medicine Shoppe resulting from the 10:15 a.m. shooting of a white masked man who demanded drugs.

Police have not identified him nor have they the private security guard, reported to be a retired deputy. This was the third robbery of the pharmacy in each of the past three years.

An autopsy was scheduled over the weekend and police may release the names of the robber and the security guard today.

Mayor Sally Mackay said after Saturday's shooting that she would set up a meeting early today to meet with City Manager John Hagood and Police Chief Ronald Pagano to discuss concerns about citizen safety in what has been a two-week crime wave that has included a previou armed robbery of a pharmacy, a carjacking of two teenage girls, a car chase, a night prowler breaking into cars, an armed robbery and stabbing in a department store and the beating of a man for his money with a sawed-off shotgun.

NSB pharmacy robber shot and killed is I'd; security guard who took lethal action is a former cop 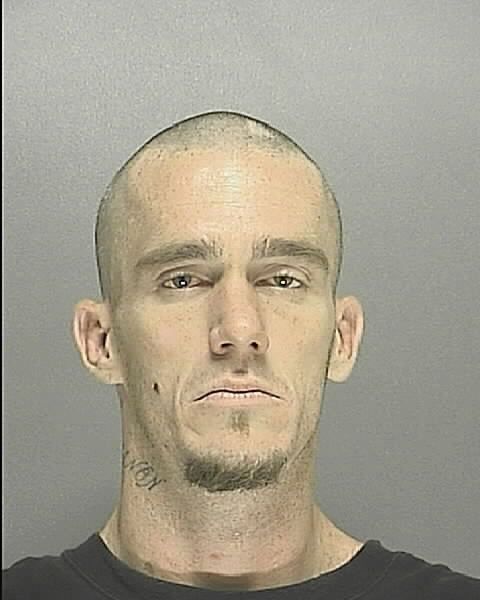 NEW SMYRNA BEACH, Fla. -- Keith Allen Higginbotham, 29, of Edgewater, has been identified as the would-be robber shot and killed Saturday morning by a plainclothes security guard at the Medicine Shoppe Pharmacy on North Dixie Freeway after throwing a backpack at the pharmacist and ordering him to fill it with pain-killer medicine.

The man who took lethal action was Kenneth Smith, 63, a retired police captain with the New Smyrna Beach police and retired as well as a Volusia County deputy.

According to a New Smyrna Beach police report, Higginbotham barrelled through the front door and threw the backpack at pharmacy owner Jack Bosker, while pointing a hangun at him and then at Smith while screaming in part: Give me the (expletive deleted) Roxy."

The drug is a street name for Roxicodone, a derivative of the pain-killer Oxycodone, which is highly addictive when not taken as prescribed by a medical doctor.

Smith then pulled out his own gun and opened fire on Higginbotham, shooting him in the chest and leg.

The armed gunman was pronounced dead at the scene when New Smyrna Beach arrived at 10:17 a.m., less than two minutes after receiving a 9-1-1 call from the pharmacy. Police estimate the shooting occurred at 10:15 a.m.

Police are expected to release the surveillance tape from the pharmacy's camera. An autopsy was performed on Higginbotham this morning, with the cause of death ruled a homicide by a firearm. No arrests are expected to be made since police are treating it as a justifiable homicide.

Higginbotham was facing a burglary charge in the 7th judicial circuit when he was killed.

"On Monday, February 9, the Homicide Investigative Unit (HIU), and detectives from the New Smyrna Beach Police Department met with HIU attorneys from the State Attorney’s Office, police spokesman Sgt. Michael Brouillette said in a press statement. "Their preliminary findings indicated that Security Guard Kenneth Smith’s actions were justified. The investigation is ongoing. A final determination, in this case, will be made after the investigation is completed."

New Smyrna Beach Police responded to the Medicine Shoppe, 653 N. Dixie Freeway after receiving a 911 call in reference to an armed robbery with shots fired.

Upon arrival, officers "secured the crime scene and their initial investigation revealed that Keith Allen Higginbotham burst through the pharmacy door wearing a mask, pulled out a gun pointing it at Jack Bosker, the pharmacist and immediately threw a backpack at him, while continuously demanding Roxicodone (brand named for the painkiller Oxycodone)," according to the police report.

That is when Smith, the armed security guard employed by the pharmacy, confronted the gunman, who pointed his gun at Smith, a retired police captain with the New Smyrna Beach Police Department and a former Volusia County deputy. Smith then shot the armed Higginbotham, who was pronounced dead at the scene.