Parent company of Sears & Kmart announces 100-plus stores to close; no word yet if NSB Kmart will survive

NSBNews.net photo by Henry Frederick / Whether the Kmart here on State Road 44 is among the 100 to 120 stores targeted for closing by its parent company, Sears Holding Corp. remains to be seen. An announcement was made Tuesday that the store closings, both Kmart and Sears, are the result of lackluster Christmas sales among its 4,000 stores nationwide.

NEW SMYRNA BEACH -- News today that as many as 120 K-Mart and Sears stores are going to be closed sent a shudder here where the Kmart on State Road has become a lifeline for nearby residents, especially with Walmart closing at the NSB Regional Shopping Center to make way for the Walmart super center further west near the I-95 interchange.

"I think it's sad," 63-year-old Katherine Zow told NSBNews.net as she was heading home a short distance away. "This is an affordable place to shop and we need it now more than ever because the Walmart moved."

Sears Holding Corp., owner of the Sears and Kmart brands, announced today it could no longer keep marginally producing stores going, and that as many as 100 to 120 stores nationwide would be closed due to what the company said were lackluster Christmas sales.

In recent years, the Port Orange Kmart closed and in August two Central Florida Kmart stores in Ocala and in Orlando closed.

Should the New Smyrna Beach Kmart close, residents east of that store would have to travel another 6-plus miles to the new Walmart, which open two months ago.

Zow said local residents use Kmart because they are already hurting in the entrenched recession and can still find bargains.

"It is an especially affordable place because of the bad economy in the first place," she said.

NSBNews.net is Florida's first fully-online 24/7 Internet newspaper launched April 7, 2008, and based in New Smyrna Beach. It is led by award-winning journalist Henry Frederick and award-winning blogger Peter Mallory with emphasis on breaking news, news of record and investigative reporting here and across the Sunshine State. 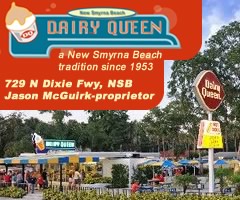