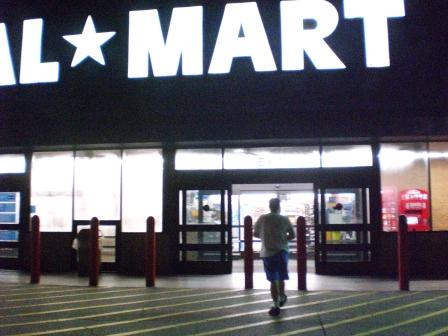 Big Lots is the new anchor tenant for the NSB Regional Shopping Center, along with a new Bealls Outlet, replacing Walmart as shown here, which closed last year with the relocation of a new Walmart Supercenter further west on State Road 44. Additionally, the city is getting a Dollar General Market where the old Food Lion was on the beachside before it closed in February.

NEW SMYRNA BEACH -- The city is getting an infusion of new stores at the NSB Regional Shopping Center with a Big Lots and Bealls Outlet and a Dollar General is moving in where the Food Lion was on the beachside.

New Smyrna Beach's mayor confirmed those plans late Monday night after a series of messages he received from city and county officials while working at his SoNapa restaurant in Maitland.

"We're getting a Big Lots and a Bealls Outlet where the old Walmart was located," Mayor Adam Barringer said of the new anchor store and its companion in the NSB Regional Shopping Center on State Road 44. "This is exciting news for New Smyrna Beach in this economy."

The NSB Regional Shopping lost its anchor last year when Walmart closed to relocate to the new Walmart Supercenter 3.5 miles west on 44, just after the Interstate 95 interchange.

Barringer said he was alerted by county officials that a Dollar General Market would locate where the Food Lion operated on the beachside before closing its doors in February. In April, the Kmart closed in the plaza just east of the NSB Regional Center, resulting in the loss of two anchor stores in back to back plazas.

"It's a wash," said the mayor, himself a small business owners with his SoNapa restaurants here on the beachside and in Orange County. "Is it economic development? We're not creating new jobs It's retail. It's going to create jobs to replace jobs that were lost and that's a good thing. It's going to fill empty space, again a good thing."

"It's a wash," said the mayor, himself a small business owners with his SoNapa restaurants here on the beachside and in Orange County. "Is it economic development? We're not creating new jobs It's retail. It's going to create jobs to replace jobs that were lost and that's a good thing. It's going to fill empty space, again a good thing."

Barringer said he'll be looking to see the impact of the new Bealls Outlet will have on an existing store already in the NSB Regional Shopping Center as well as a Bealls in the Indian River Plaza on the beachside.

"This is going to make it more convenient for local shoppers looking to buy groceries," he said. "The message here is we've dealt with infill of these existing shopping centers. This is all positive news. Truly, if you think about it, you either grow the population or the tourism base."

Having the new stores means jobs replaced for the 60 to 80 lost with the Food Lion and Kmart closings and providing more shopping venues here as opposed to having to drive to Port Orange or elsewhere, said the mayor who won re-election to a second-term without opposition during qualifying in June.

Barringer said he was informed in an e-mail that New Smyrna Beach CRA/Economic Director Tony Otte was told the Dollar General Market would go in where Food Lion was by the end of the year.

Neither Otte nor the city manager could be reached for comment Monday night. Messages left for Commissioners Jack Grasty, Lynne Plakett and Judy Reiker went unanswered.

Commissioner Jim Hathaway, a candidate for the County Council dist. 3 seat in the November general elections against fellow New Smyrna Beach resident Deb Denys, was already asleep when a call was made to his residence shortly after 8 p.m. . He gets up early to make bread runs at local grocery stores.