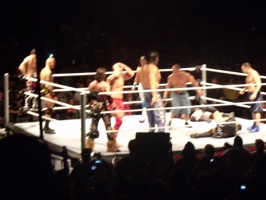 Headline Surfer photos by Henry Frederick / WWE supersatars square off in the ring at the Ocean Center in Daytona Beach two years ago. Shown in the middle image is the Great Khali and above, wrestler and valet Maryse.

YouTube videos / Here are amateur videos of the WWE's July 2012 house show at the Ocean Center in Daytona Beach. Among the combattants are WWE champion John Cena, Sheamus, "the Viper"Randy Orton, the Great Khali, Chris Jericho, John Morrison, Santino Marella and others vs. the villainous gang, "The Nexus," led by Wade Barrett.

YouTube videos / The two biggest and baddest names in the WWE now and could be part of the Ocean Center house show are The Shield, the trio of Dean Ambrose, Seth Rollins and Roman Reigns; and possibly muscled-up Ryback (not yet on the card for Daytona), with his "Feed Me More" chants, a dead ringer for former WCW wrestler Goldberg. Ryback is now the nemesis of WWE champion John Cena, who beat The Rock at Wrestlemania 29 to get back his WWE title belt. Where Ryack stands with the Shield remains to be seen. If Ryback shows up at the Ocean Center along with Cena and The Shield, then Daytona will be rocking!