Charlie Crist to formally announce candidacy for governor this morning in St. Petersburg

ST. PETERSBURG -- Former Florida Gov. Charlie Crist will launch his gubernatorial campaign this morning at a public rally to be held at Albert Whitted Park near his St. Petersburg home.

"I'm looking forward to Monday and making it official in every way," Crist said on Friday. "I just hope that the message that we deliver will lift Florida's spirits and let her know that there's a brighter future tomorrow. And it's coming."

Former Florida Gov. Charlie Crist to announce this morning his intention to seek the governorship again at a rally in St. Pete.

"I'm looking forward to Monday and making it official in every way," Crist said on Friday. "I just hope that the message that we deliver will lift Florida's spirits and let her know that there's a brighter future tomorrow. And it's coming."

The public announcement will be delivered by Crist, now a registered Democrat, at 10 a.m. at the park, 480 Bayshore Drive SE, about a half hour after an expected crowd of supporters -- and perhaps foes -- have gathered.There is limited parking near the event site, car pools and early arrivals are recommended. Public parking is available in metered parking or in city parking garages.

Crist was Florida's governor from 2007-'11, when his party affiliation was Republican. Instead of seeking re-election in 2010, Crist announced he was running for the U.S. Senate seat being vacated by Mel Martinez, but after sorting polling by Tea Party and Conservative Republican Marco Rubio, he ran as an "independent" and lost in a three way battle to Rubio.

Crist finished a distant second with 30 percent of the vote to 49 percent for Rubio and 20 percent for Kendrick Meek, the Democratic candidate. Crist will try to unseat first-term incumbent Republican Gov. Rick Scott. Crist's new-found love for the Democratic Party is not being reciprocated by at least one party loyalist.

"What a surprise," said Nan Rich, former Democratic state senator, who has already announced his intention to run, and with Crist's expected announcement, a looming primary. "He's been running for a year, he's finally announced and I think everybody knew he was going to do this."

Crist, once pegged as a possible vice presidential running mate for John McCain and even a potential future GOP presidential candidate himself, is now being pegged as an opportunist by Republicans.

"He wanted to be in D.C. a couple of years ago, that's where he wanted to solve all the world's problems, and now he feels he wants to be back as governor without any good reason," said Lenny Curry, Florida Republican Party chairman. "Rick Scott has a record of success to run on and Charlie has a lifelong 'It's all about Charlie' to run on."

Crist took a job in St. Petersburg with the personal injury law form of Morgan & Morgan headed by patriarch John Morgan, long since famous for his TV commercials, headquartered in Orlando. But Crist's candidacy once again for the governorship was never really in doubt by either Republicans or Democrats.

Dana Swanson will provide an overview of party affiliation and how Crist's announcement sets things up for the mid-term elections in Florida and the nation in 2014.

Cory Thompson, formerly president of the Young Republicans of Volusia County, and a big fan of Gov. Rick Scott will discuss his loathing of Crist. 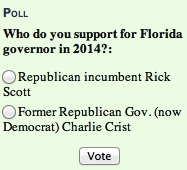 Headline Surfer® graphic / At left is a snapshot of the 24/7 internet newspaper's newest poll.

Vote on whether you support Charlie Crist or Rick Scott as governor of the Sunshine State in the 2014 elections.
To vote, please go to the poll on our home page, left hand side below the publisher's blog.