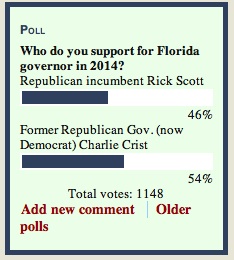 Headline Surfer® graphic / If the race for governor were held today, Charlie Crist would beat incumbent Rick Scott, a poll by the 24/7 internet newspaper shows.

DAYTONA BEACH -- A week-long poll on by Headline Surfer® via HeadlineSurfer.com shows 54 percent of respondents favor Charlie Crist over Gov. Rick in head-to-head competition in the 2014 election for governor.

The polling began 7:33 a.m. Monday, Nov. 1, just hours before Crist made his announcement in St. Petersburg. The poll was closed at 6 p.m. today.

Though Crist announced his run as a Democrat, he's not the only Democrat running for the state's highest ofice. Former State Sen. Nan Rich of Weston, also is seeking the Democratic nomination for governor.

Here is what Headline Surfer® political bloggers and a guest had to say about the race for governor between Charlie Crist and Rick Scott: