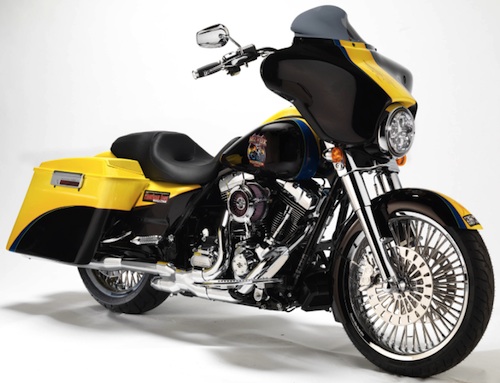 Photo for Headline Surfer® / You could be the proud owner of this 2013 Harley-Davidson Street Glide valued at $35,000, customized by Empire Harley-Davidson of New Rochelle, NY. But like lotto fever, you can't win if you don't play.

DAYTONA BEACH -- Your odds of being struck by lightning in a given year is one in 750,000. The odds of winning Powerball are one in 175,223,510. So the odds are definitely more in your favor in if you purchase a $50 ticket for a drawing in mid-March for a custom-built 2013 Harley Davidson Street Glide valued at $35,000, in the Daytona Chamber of Commerce's drawing of the "Official Bike Week Motorcycle."

And that's if all the tickets are purchased, which isn't likely.

"I doubt we would sell every last ticket so the odds are even more in the buyer's favor," Jim Cameron, vice president of government relations for the chamber, told Headline Surfer® candidly earlier this afternoon.

"I doubt we would sell every last ticket so the odds are even more in the buyer's favor," Jim Cameron, vice president of government relations for the chamber, told Headline Surfer® candidly earlier this afternoon.

The 2014 drawing, an iconic part of Bike Week in greater Daytona Beach also happens to be the 20th year that the Daytona Regional Chamber of Commerce’s Foundation has made this happen.

The bike is now on display in the center of the Daytona Beach Mall, outside of Dillard’s, where brochures may be picked up and visitors can get a close-up of the grand prize.

From mid-January until Bike Week 2014, it will be displayed at the Hilton Daytona Beach Oceanfront Resort on A1A in the heart of the beachside tourism district and just caddy-corner from Main Street -- ground zero for several hundred thousand bikers.

This particular Harley was featured in American Iron Magazine, which included the complete build, from frame to finished masterpiece.

The drawing will take place on Saturday, March 15, at the Riverfront Park Stage, located on Beach Street, where one lucky winner will go home with the bike. You don't even have to be present to claim the Harley if you have the winning ticket.

Only 4,500 tickets have been printed, and only one person will walk away with the grand prize – a 2013 Harley-Davidson Street Glide valued at $35,000 customized by Empire Harley-Davidson of New Rochelle, New York!

Tickets are $50 apiece and can be purchased by calling the Chamber at (386) 255-0981 or online at www.officialbikeweek.com. And hey, if you don't win the Harley, but are among 10 runners-up, your chances of winning something among the following prizes is that much greater. Check out these consolation prizes:

All proceeds go to the Daytona Beach Community Foundation, who works in conjunction with the Bike Week Festival Task Force, a committee of the Daytona Regional Chamber of Commerce, operating on a year-round basis to make Bike Week in Daytona Beach more enjoyable for its visitors. Additionally, the committee includes participation from all sectors of the community to assure that the event is successful for both businesses and residents alike.