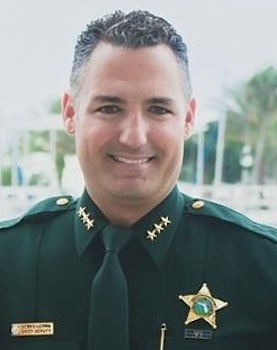 Editor's Note: The Interview
The Headline Surfer® multimedia 'Sunday Conversation' on-camera interview with Seminole County Sheriff-Elect Dennis Lemma will be published shortly.
What follows here is a sidebar bio summary on Lemma, who is shown in the display image in uniform.

SANFORD, Fla. -- Dennis Lemma was appointed Sheriff-Elect of Seminole County on June 24, when he stood alone in submitting qualifying papers by noon of that Friday Friday's deadline to run in the 2016 elections.

An earlier opponent dropped out and when all was said and done, Lemma had no opposition. Therefore, he was elected to the Office of Sheriff of Seminole County, effective Jan. 3, 2017. Until then, he is the sheriff-elect.

The 44-year-old Lemma, retiring Sheriff Don Eslinger's chief deputy and hand-picked successor, is a 24-year veteran of the Seminole County Sheriff's Office, who in his role as second in command over the past four years, has provided oversight to all operational and administrative functions. These include leadership and strategic direction for the law enforcement agency’s 1,200 full-time employees and managing a $108 million annual operating budget.

Sheriff-Elect Lemma began his career with the Sheriff’s Office in 1992, and spent four years as a correctional officer before becoming a deputy sheriff.

He served as a school resource deputy and then as a crimes against children investigator before receiving a promotion to sergeant of the Special Operations Section in 2002.

Four years later, Lemma became a lieutenant, in charge of the Community Services Division where he managed the agency’s crime prevention efforts, served as the public information officer and coordinated programs to assist the elderly and domestic violence victims.

In 2008, Lemma was promoted to captain and tasked with management of the uniformed-patrol division, property crime investigations, traffic safety and code enforcement.

In 2011, Lemma was appointed to major over the Department of Neighborhood Policing. In this role, he oversaw the operation of five divisions, including uniformed patrol, special operations, juvenile enforcement and intervention, public affairs and community services.

Sheriff-Elect Lemma received an honorable discharge from the U.S. Marine Corps. He holds a bachelor’s degree in criminal justice administration from Columbia College, a master’s degree in administrative leadership from the University of Oklahoma and is a graduate of the FBI National Academy.

• Master’s degree in administrative leadership from the University of Oklahoma in Norman, Okla, 2009-2011;

Lemma lives in Oviedo with his wife, Diana, who also works for the Seminole County Sheriff's Office as a lieutenant. They have two sons.