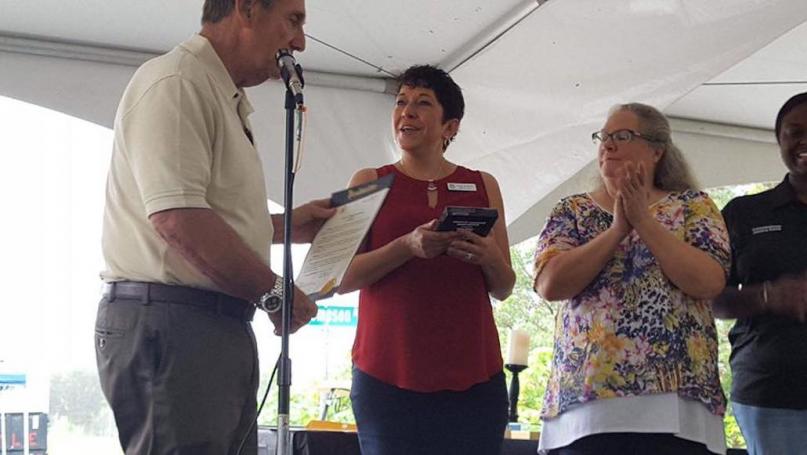 Photos for Headline Surfer / DeLand Mayor Bob Apgar presents a proclamation from the municipality to Volusia County Clerk of the Court Laura Roth for her contributions and those of her staff in helping citizens of Spring Hill who might have had a minor scrape wih the law to have minor criminal offenses removed from the public record through a process called 'expungement.'
By HENRY FREDERICK
Headline Surfer

DELAND, Fla. -- When crack cocaine first hit the streets in the mid-1980s, an already-impoverisherd and historically black community by the name of Spring Hill outside the DeLand city limits had become a major drug den for the better part of the next two decades -- its poor and law abiding citizens caught in the cross fire between rival drug dealers.

Fast forward three decades and commmunity stakerholders like Volusia Coiunty Clerk of the Court Laura Roth are masking a difference.

The intersection of Adelle and West Beresford Avenue became a constant game of cat and mouse between law enforcement and violent armed crimininals who would seek cover within the development -- several roqs of small houses hearkening back to post-Reconstruction when freed slaves would work in several large mills in exchange for housing there. As time marched on and the factories closerd, Spring Hill was home to multi-generations of families, who would pass on the homes to theitr offspring.

Since the dawn of the 21st century, Spring Hill has seen marked improvement from the crime den it had become. The  Daytona Beach News-Journal featured a three-day series on Spring Hill in 1997, leading to community stakeholders making a commitment to improving the quality of life, including better organized drug sureveillance and raids between the Sheriff's Office and DeLand police, stronger code engorcement, increased educational programs and job opportunities.

In order to take advantage of larger sums of federal grants under a "Weed and Seed program -- literally weeding out the violent criminal element and bringing in community ptograms -- the isolated community was annexed into the City of DeLand where adjacent areas that served as a buffer, were all rolled into an expanded Spring Hill.

Nearly two more decades in the rear window and Spring Hill is celebrated as an important historic and cultural part of DeLand, despite the fact its core commiunity continues to languish in poverty.

There's a new generation of stakeholders in the greater DeLand area keeping the momentum going in Spring Hill. Among them is Roth, the first-year elected Volusia County Clerk of Court, who has used her lergal expertise and longstanding experience with the office to work with individuals held back by petty offenses.

For her tireless contributions on top of her demanding administrative leadership, Roth was honored Saturday with an "Exceptional Community Partner Award" by the Spring Hill Neighborhood Association as well as an official proclamation from the City of Deland in her honor.

"It's rare for the Clerk's office to be recognized as important to the community, and today was a real milestone," Roth said, crediting her clerks with holding "expungement workshops that led to this amazing event and to those that attended the ceremony."

For her tireless contributions in addition to her demanding administrative leadership, Roth was honored Saturday with an "Exceptional Community Partner Award" by the Spring Hill Neighborhood Association as well as an official proclamation from the City of Deland in her honor.

"It's rare for the Clerk's office to be recognized as important to the community, and today was a real milestone," Roth said, crediting her clerks with holding "expungement workshops that led to this amazing event and to those that attended the ceremony."

Expungement is a legal process whereby individuals previously saddled with minor offenses are given a clean slate, with the potential for earning a decent wage and hope for a better life for themselves and their families.

FAST FACTS: Henry Frederick, the writer of this story and publisher of Headline Surfer was recognized in 2008, for his in-depth reporting on Spring Hill with an honorable mention (2nd place) for the James K.Batten Award for Outstanding Public Service. Frederick, who covered cops and courts for the Daytoina Beach News-Journal. First place went to the Fort Lauderdale Sun-Sentinel for a series on lack of DCF oversight of foster care children abused and even killed by their caretakers. The Fort Lauderdale won first place  for nearly a decade, of Andrew Cunanan in the slaying of fashion designer Gianni Versace. Frederick would go on to win journalism awards for dozens of cops and courts stories with the News-Journal over the next half decade. Frederick also won an award for breaking news for the shooting death of a 14-year-old boy by elderly DeLand parade float builder Stanley Quaggin when the teen, Eric Brooks of Deltona, and a 9-year-old boy entered his dilapidated home, mistaking it for a junkyard office. Quaggin was tried for murder, but convicted of manslaughter. Hre was acquitted of the same lesser charge at a second trial and died shortly thereafter. The younger boy committed suicide. Frederick finished second in breaking news to the Miami Heraldf for its staff reporting on the capture of fugitive Andrew Cunanan in the slaying of fashion designer Gianni Versace. Frederick would continue to win awards for dozens of stories with the News-Journal in the next half decade.With the awards he also has since amassed with Headline Surfer, in the past five years, Frederick has more award-winning stories than any other reporter currently in journalism in the Sunshine State.