Headline Surfer Multimedia video presentation / At left, Thomas Coulter, 25, second from right, is shown with the Daytona 24 recruits on Thursday morning before training exercises. The following morning, Coulter collapsed at the start of light training that included pushups and jogging. He was transported to Halifax Hospital where he died Monday morning. A Daytona Beach PD police escort transports Coulter's body from the hospital to the medical examiner's office in DeLand, Florida.
By HENRY FREDERICK
HEADLINE SURFER

Coulter and 23 other new recruits had just started a session of jogging and doing pushups around 8 a.m. Friday when Coulter collapsed and was subsequently rushed by ambulance to Halifax Hospital where he remained on a ventilator throughout the weekend before succumbing earlier today.

“I just don’t understand," Capri said. "They told us he was going to be OK, initially. I’m hoping the autopsy will show us what happened."

Capri said there was no indication of previous health issues and Coulter passed every test to become a police officer.

“Sometimes things just happen -- you don’t know the reason why," Capri said. "A lot of it is in God’s hand.” 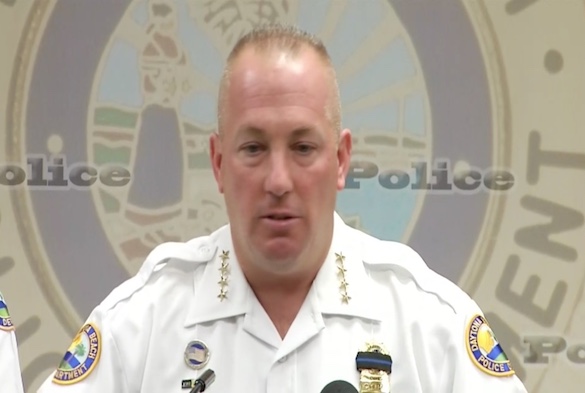 A stoic-looking Daytona Beach Police Chief Capri said at an 11 a.m. press conference that there was no indication of previous health issues and Thomas Coulter passed every test to become a police officer.

“Sometimes things just happen -- you don’t know the reason why," Capri said. "A lot of it is in God’s hand.”

“He had to fight hard to get that,” Capri said. “He knew he made it. He obtained his goals.”

The other trainees were offered counseling and given Monday off from training, the police chief said, adding Coulter will "always be a part of this police department."

The flag in from of the Daytona Beach Police Department headquarters was ordered lowered to half-staff in honor of Coulter. And a police escort led the transport of Coulter's body from Halifax Hospital to the Volusia County Medical Examiner's Office in DeLand where an autopsy was ordered.

Coulter, originally from Williamstown, N.J., and living in Deltona, is survived by his wife, Jazmin Olsen-Coulter. Funeral arrangements have not yet been set.

Weekend vigil at the hospital

Coulter's older sister, Bridgette Molina, was among several family members and friends posting updates in social media throughout the weekend on his dire health situation.

"Today has been the scariest day of my life," she wrote Friday night. "Getting the call that he was in Halifax Hospital after training with his fellow officers, not understanding what's happening... He is on a breathing tube right now and heavily sedated." 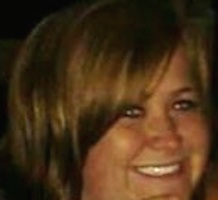 Coulter's older sister, Bridgette Molina, was among several family members and friends posting updates in social media throughout the weekend on his dire health situation.

"Today has been the scariest day of my life," she wrote Friday night.

"Getting the call that he was in Halifax Hospital after training with his fellow officers, not understanding what's happening... He is on a breathing tube right now and heavily sedated."

She continued, "Doctors still don't truly know the cause or really what's going on and I hate this. This waiting game -- too much fluid in the lungs -- too much this or that going on. Answers! I need them! I know you all mean well, but I just need prayers right now."

Molina updated Coulter's situation Saturday afternoon: "As of 10 a.m. this morning they said he did aspirate so now he has pneumonia, his kidneys are in distress and they still don't know what the cause of his collapsing was from. He is still on a breathing tube, he will still be sedated until possibly tomorrow. But there is hope that they can wake him slowly later today. I have not been able to go inside the room and touch his hand and kiss him." 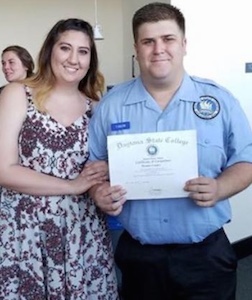 Thomas Coulter is shown a year ago holding his police certificate from Daytona State College, with his wife, Jazmin Olsen-Coulter, by his side. They were married in November.

Molina added, "This has been so heartbreaking! He was my baby twin growing up and now he is helpless. Fighting for his life and they can't even tell us why. They are sending in a neurologist and infectious disease doctor and couple others to figure out what's going on. I hate this! Over 30 hours of him laying there..... now he has pneumonia."

And on Sunday, the news Molina provided in social media was far more dim, with some 50 family members and friends in the ICU waiting room.

"They told us he has a 5% chance of survival because multiple organs are failing. Doctors can't figure out the exact cause and they said it would take a miracle for him to survive this. I believe in miracles! 25 years old, loving, caring, just married only six months ago! A police officer, a college graduate... all of this, I am so proud. Most importantly, he knows Jesus! Tom is a fighter!!! Please pray."

After Coulter's passing on this Monday morning, Molina said, "My dearest baby brother... life will NEVER be the same without you. You were my best friend growing up and I loved watching you grow into an incredible man."

Molina reminded family and friends alike that Coulter had achieved much in his young life:  He graduated from college, married a beautiful woman, and became a police officer. This morning he passed and met Jesus at the gates.

The Daytona Beach Police Department issued an updated statement on the death of recruit Thomas Coulter, which reads: "It is with great sadness that we share with you some sobering news. Last Friday during physical training exercises, one of our newly hired officers experienced a medical issue. Officer Thomas Coulter, 25, appeared pale with his lips turning purple. The drill was stopped and medical assistance was administered." 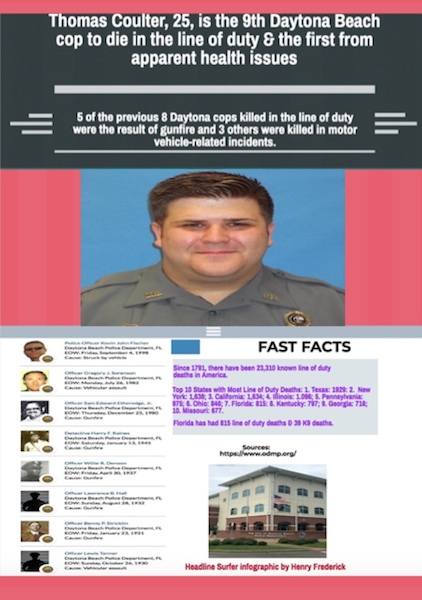 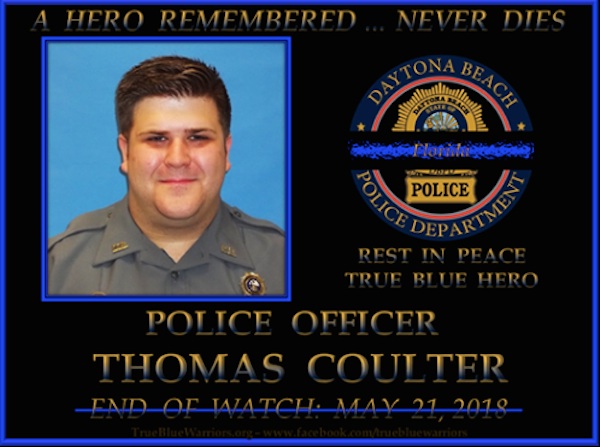 Thomas Coulter, the Daytona Beach police recruit who died earlier today, has been added to the Law Enforcement *Line Of Duty Death*.