Daytona Beach Shores cops on having dealt with Hurricane Dorian: 'That's a wrap'

Headline Surfer video / Multimedia presentation on dramatic takedown of a burglary suspect on Sept. 2, 2019, just days after a state of emergency was declared in Volusia County in anticipation of Hurricane Dorian.

Photo for Headline Surfer / Daytona Beach Shores Department of Public Safety officers and other first responders strike a pose to highlight their duties in response to hurricane-related protection for the citizens of this beachside city just south of Daytona Beach with its primary access to the mainland via the Dunlawton Bridge, which policed the east entrance at A1A or Atlantic Avenue, and Port Orange cops handling public safety on the west or mainland entrance of the bridge at the intersection of US 1 and Dunlawton Avenue. Shown in the pic above are Daytona Beach Shores Police Chief Stephen Dembinsky (second from left) with several of his public safety officers , EVAC personnel, and Sheriffs's deputies with one of the VCSO's two high water rescue vehicles. The photo was taken after dinner Tuesday night, shortly before wind speeds picked up with the northern outer bands of Dorian churning out in the Atlsntic Ocean and pounding the Bahamas.​ 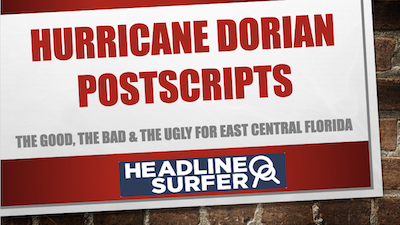 For Stephen Dembinsky, the veteran director of the Daytona Beach Shores Department of Public Safety, it was quite the wait for Hurricane Dorian for his agency, whose officers are cross-trained in police and fire services in Daytona Beach Shores, sandwiched between Daytona Beach and Ponce Inlet, with its main roadway artery along A1A.

"We had plenty of time to prepare and are so thankful to have been spared," Dembinsky said Wednesday.

"Throughout the past few days, we housed and fed first responders from throughout the county," Dembinsky continued, adding, this happened with the help of generous donations from Starbucks at Dunlawton and Peninsula, and Daytona Beach Shores-based businesses Publix, 7/Eleven and Bruno's Pizza.

Dembinsky also had praise for his public safety agency's Facebook followers, describing them as having done "an amazing job sharing information as it was released."

Daytona Beach Shores residents reciprocated thanks for a jon well done by their public safety department and other first responders in their city during the handling of Hurricane Dorian.

"Thank you for keeping our homes safe and for your service to our community," Elizabeth Rasile Evans said.

"You guys are absolutely the best," Eve Windham said. "One of the main reasons we love the shores is because of the public safety personnel."

Paula Burkhardt Rizzo echoed the praise: "Thank you for all you do for our community. We are all grateful for you and proud of you."

Sue Miller added, "Thank you all for your service and continuing to keep us updated. Glad everyone is safe and the storm is gone."

It was a police body cam video on the arrest of a burglary suspect that put the Shores on the map early on with respect to Hurricane Dorian media coverage.

Monday, Sept 2:
• A mandatory evacuation for all of Daytona Beach Shores went into effect at 10:30 am, with this message: "If you evacuate your home, DO NOT LEAVE YOUR PETS OR ANIMALS BEHIND. It is unlikely for pets or larger animals to survive on their own. If by some chance they do, you may not be able to find them when you return. Prepare now and protect your family and pets before the next disaster strikes."
• Daytona Beach Shores officers arrested Jeremy Crouter (10/07/1986). Crouter was charged with battery on a law enforcement officer, resisting arrest, burglary and possession of methamphetamine.
• Residents were asked via social media to remove all items from balconies due to expected wind gusts with the approaching hurricane.
• The DBS Publix advised it would remain open until 5 p.m be open until 5 pm.  Shores cops issued a reminder to residents via Facebook to make sure your emergency supplies were topped off with an emphasis to "remember, everyone is under some stress and pressed for time. Be kind and help each other."
Tuesday, Sept 3:
• Beachside curfew went into effect at 6:09 p.m. until 6 a.m. the following morning.
• Beachside bridges closed to east-bound traffic due to gusting winds exceeding 39 mph.
Wednesday, Sept 4:
• Dunlawton Bridge re-opened.
• Mandatory evacuation over.
• 11:40 am- Emergency overnight curfew has been lifted.
Thursday, Sept. 5:
• All Daytona Beach Shores city departments has returned to normal business;​
• Damage assessments are being done however there is no road blockage or major hazards.
• Please remain vigilant. If you see something suspicious, say something. VCSO non-emergency line 386-248-1777. Please do not use Facebook to report incidents. EMERGENCY DIAL 911.
Previous posted Headline Surfer stories on Hurricane Dorian
BREAKING NEWS: Granada Bridge in Ormond shut down to beachside traffic due to hurricane-related wind gusts​
Post Date: September 3, 201​9
NSB cops issue a silver alert for an elderly woman who was supposed to drive to Leesberg and stay with a relative to escape Hurricane Dorian, but she was a no show
Post Date: September 3, 2019
Volusia's mandatory evacuations for beachside Daytona, Ormond, the Shores, Ponce Inlet & New Smyrna begin today amid uncertainty as to what Hurricane Dorian will do next
Post Date: September 2, 2019
Floridians anxiously await Dorian's next move
Post Date: September 1, 2019
New Smyrna Beach Mayor Russ Owen on waiting on Dorian: Keep calm & be prepared; 'Help a neighbor'
Post Date: September 1, 201
Port Orange Mayor Don Burnette: Hurricane generators in stock; asking folks to 'Pray for the people of the Bahamas'
Post Date: September 1, 2019
Greater Daytona could be spared worst of Dorian: Hurricane has shifted eastward, Volusia County officials say
Post Date:September 1, 2019
Volusia County declares local state of emergency in anticipation of Hurricane Dorian
Post Date:August 29, 2019