Daytona State College No. 1 in the nation for most affordable online engineering degrees 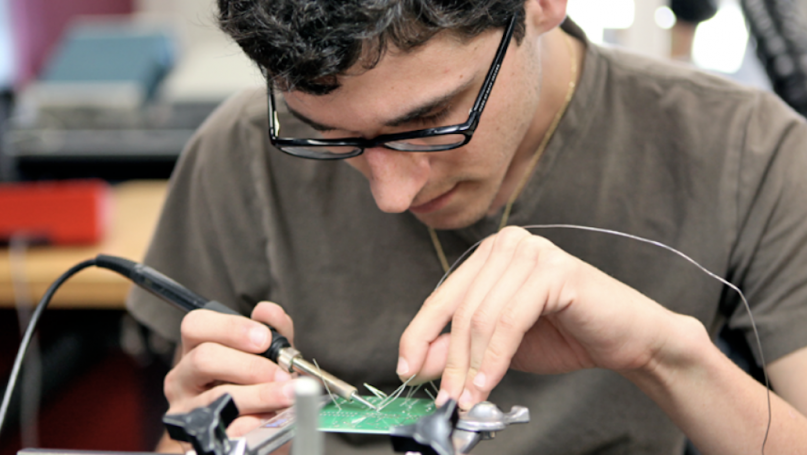 Photos for Headline Surfer / An engineering student at Daytona State College works on a project towards fulfillment of his degree. DSC has earned a second No. 1 ranking in as many weeks for affordability in online education -- this time for the Bachelor of Science in Engineering Technology program.

DAYTONA BEACH, Fla. -- Daytona State College has been on a roll in terms of topping national rankings where it most matters -- affordability of degree programs.

DSC is ranked No. 1 in the nation for most affordable online engineering degrees.

Engineering Technology is the second DSC online program in recent weeks to earn the top spot in its respective field, as shown in a story posted on Sept. 17 in Headline Surfer: Daytona State College's RN to BSN program ranked as nation’s No. 1 most affordable nursing school.

For the second time this month, Daytona State College has earned a No. 1 ranking for affordability in online education.

This time that honor goes to DSC's Bachelor of Science in Engineering Technology program, which sits at the top of the list published by the Bachelor’s Degree Center, a free guide to traditional and online degree programs in all disciplines among universities and colleges.

“We are a top quality program and we play on the same field as all of the universities,” said Dr. Ronald Eaglin, chairman of DSC's School of Engineering Technology.

The ABET accredited BSET at Daytona State is designed for future engineering technologists as they take on the various industries throughout the economy.

“We are a top quality program and we play on the same field as all of the universities,” said Dr. Ronald Eaglin, chairman of DSC's School of Engineering Technology.

The ABET accredited BSET at Daytona State is designed for future engineering technologists as they take on the various industries throughout the economy.

With logistics, problem-solving, and quality control as essential skills that are taught and enforced in the program, many of these students find positions that are not only in engineering, but also in a management setting.

The program is designed to prepare them immediately for the workforce or graduate school. It also offers an electrical engineering technology certification for those who choose to specialize in this field of engineering.

Students graduating from DSC’s Engineering Technology program will be prepared to effectively work as part of an engineering team. Specifically, graduates will be able to translate theoretical designs into actual products in professions such as: systems engineer, process analyst, technical sales engineer, network supervisor, project engineer, calibration engineer or programmer.

The Bachelor of Science in Engineering Technology program, one of 11 bachelor’s degrees offered by Daytona State, is accredited by ABET, which provides accreditation for college and university programs in STEM (science, technology, engineering and mathematics) disciplines.

“Being accredited by ABET is a really big deal too, with a lot of implications,” Eaglin said, adding “One of the advantages of ABET is it allows our BSET graduates to sit for the Professional Engineering exam.”

Stanley Escudero, chosen by his peers on the Daytona State College Board of Trustees last month to head up the policy-making entity couldn't have asked for better timing in being installed as the new chair with successive online programs highlighted in the national educational landscape.

Earlier in September, the DSC Bachelor of Science in Nursing was also ranked as the nation's No. 1 most affordable online nursing school that was highlighted previously in Headline Surfer as noted above.

"As you can see, DSC is quite highly ranked in several areas and not just against other state/community colleges," Escudero so eloquently pointed out to the award-winning internet news outlet, "but against four-year universities as well."