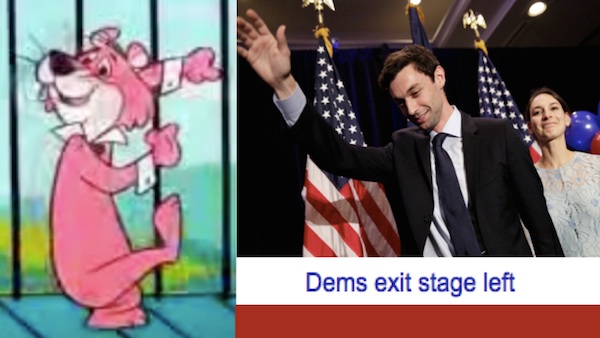 Headline Surfer illustration / With all the ballots counted, Republican Karen Handel won the most expensive House race in U.S. history by 3.8 percentage points. That’s a larger margin of victory than the 1.5 points that Donald Trump carried Georgia’s 6th Congressional District by last November, the Washington Post reported in her crushing victory over Democrat Jon Ossof in Georgia's 6th Congressional District election on Tuesday.​ Like Snagglepuss, it's 'exit, stage left' for Ossof and the Democrats, as the image here liyerally has him leaving to the left.

DAYTONA BEACH, Fla. -- By over-hyping and over-funding Tuesday's election in the sixth district of Georgia, the Dems have given President Trump exactly the kind of win he needed to advance his agenda with Congress.

There is nothing magic about Georgia’s sixth district. Karen Handel’s victory over Jon Ossof should have been just one victory in a House of 435 members. But, desperate to reverse their string of losses in special congressional elections, the Democrats foolishly chose to magnify yesterdays’ contest into a referendum on the Trump Presidency.

They concluded that a traditionally Republican district where the GOP voter base is well-educated, where Mr. Trump lost to Marco Rubio in the 2016 Republican primaries, where he only defeated Hillary by about one and a half percent, and where the demographics are shifting to include many more Hispanics and young voters could be flipped to Dem if only they poured in enough money and rallied enough celebrities. In the process they made this the most expensive House race in American history, spending over $31 million dollars and driving the Republicans to raise some $23 million for their candidate.

And they lost – big time. Handel beat Ossof by a percentage four times greater than what Trump enjoyed over Hillary.

Along the way they forced the voters of the Georgia sixth as well as many Americans elsewhere to consider seriously whether they would prefer President Trump and his policies of national resurrection to the mindless resistance of the ever-more-Left Democrats.

MESSAGE TO THE DEMS:  Georgians are not stupid, they are a justly proud people who do not take well to being told what to do by outsiders, and they are not for sale.

By my count there have been five special congressional elections this year and the Democrats have lost four of them. The only time they won was in California where the contest was between two Democrats. Yesterday they bet the whole farm in Georgia’s sixth district and they lost again.

If I were a Democrat (And I think God every day that I am not) I would be demanding the resignations of Nancy Pelosi, Chuck Schumer and the other serial failures who run the party. But they are not. Indeed, they cannot.

By my count there have been five special congressional elections this year and the Democrats have lost four of them. The only time they won was in California where the contest was between two Democrats. Yesterday they bet the whole farm in Georgia’s sixth district and they lost again.

If I were a Democrat (And I think God every day that I am not) I would be demanding the resignations of Nancy Pelosi, Chuck Schumer and the other serial failures who run the party. But they are not. Indeed, they cannot.

Because they are neo-Marxist true believers today’s Democrats are certain that they know what is best for the country and the world and that they know what the inevitable dialectic of history will produce. Bending to their ideology, they move farther to the left in response to the siren songs of avowed socialists like Bernie Sanders and Elizabeth Warren, they elect Marxist organizers like Tom Perez and Keith Ellison to run their party and they look to corrupt racists like Eric Holder as possible future presidential candidates.

In pursuit of ideological policies which have failed every place they have ever been tried the Democrats are laying the groundwork for future epic losses at the polls. And at the same time they build support for President Trump and his agenda among Republican senators and congressmen who have been fearful for their own re-elections.

The Democrats made yesterday a referendum on the Trump presidency and Trump sailed through with all flags flying. For any congressman or senator the primary national interest is his or her own re-election. Until the Democrats’ humiliating defeat in Georgia a number of Republican members were accepting the propaganda spewed out by the Dems and their media thralls that fairy tale investigations and Dem obstruction had made Trump so unpopular that many GOP seats were at risk in the 2018 elections. But I believe that yesterday’s win will stiffen the spines of many Republicans in both houses of Congress who will see that the Party’s base holds with Trump and even the best efforts of the Democrats cannot prevail over that.

For all Republicans elected or appointed to offices in the federal government the smart play now is to get solidly and actively behind the Trump agenda. Republicans in Congress must now use their majorities to push aside Dem obstruction and approve the policies on which the President was elected. If implemented promptly they will revitalize our economy, create vast numbers of new jobs and new wealth, rescue the national health system from the collapsing disaster of Obamacare, rebuild national infrastructure, strengthen our hollow military and rebuild the American position of power and respect abroad.

And once implemented they will guarantee the election in 2018 and thereafter of Republican candidates at all levels of government.

So, Republican electeds, yesterday Karen Handel and President Trump showed you the future. Stand up and DO YOUR JOB.