Headline Surfer photos and video / Chase Herbig, is shown overlooking the Intracoastal Waterway, in his 2018 campaign for mayor of New Smyrna Beach , and though he came up short, he did get people talking about striking a balance between controlled growth and keeping the city's Charm. Today, Herbig, owner of HIG Insurance, is one of the more recognizable faces in New Smyrna Beach and beyond with the media spotlight shined on him in Headline Surfer's coverage. The online news site has received a 2020 award for best interactive media, even though Headline Surfer has focused more of its coverage on Daytona Beach, Sanford and Orlando.

NEW SMYRNA BEACH, Fla. -- Headline Surfer has been selected for the 2020 Best of New Smyrna Beach Award for Interactive Media.

Headline Surfer Publisher Henry Frederick was ecstatic after learning of the award  in an email notification Wednesday from the New Smyrna Beach Award Program.

"We are honored to be recognized with this award in the category of Interactive Media," Frederick said. "It is a testament to the digital platform we launched back on April 7, 2008, when we were based in New Smyrna Beach." 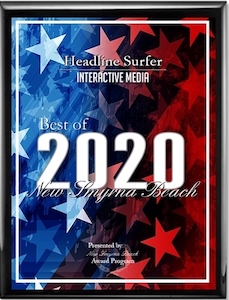 Headline Surfer Publisher Henry Frederick was ecstatic after learning of the award in an email Wednesday from the New Smyrna Beach Award Program.

"We are honored to be recognized with this award in the category of Interactive Media,"  Frederick said.

"It is a testament to the digital platform we launched back on April 7, 2008, when we were based in New Smyrna Beach."

The initial coverage was New Smyrna Beach, Edgewater and Oak Hill, and by 2012 , it had expanded countywide, especially when the media outlet's name was changed from from NSB News to Headline Surfer with the acquisition of a registered trademark for branding our news site," Frederick said.

"Throughout the years, however, that core New Smyrna Beach following has remained and that is a testament to our breaking news and investigative reporting projects." 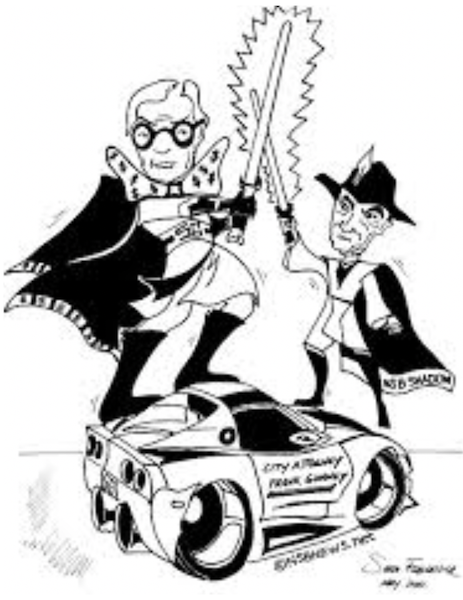 Headline Surfer video and cartoon / The video above is a feature on the pelicans and the importance of not feeding them. The cartoon at left was from a series of highly-charged debates either in the media or on the internet through highly-charged municipal government exchanges through the internet between then-City Attorney Frank Gummey and the late Nahum Litt, a retired federal judge and blogger (NSB Shadow), who challenged the status quo at City Hall. Litt died in 2019 at age 82. Gummey retired in 2017 after six years in the municipal post.

The photo illustration of Chase Herbig and traffic on the causeways, as well as the video and cartoon, are examples of the type of interactive and multimedia coverage Headline Surfer has provided in nearly two dozen cities in towns primarily in Volusia, Seminole and Orange counties.

This 2020 award marks the first time Headline Surfer has been recognized for community engagement as opposed to its community news coverage.

The online media outlet did receive a 5th year anniversary proclamation from the City of Oak Hill. And now this special award.

Each year, the New Smyrna Beach Award Program identifies companies that it believes have achieved exceptional marketing success in their local community and business category.

Various sources of information were gathered and analyzed to choose the winners in each category, according to the news release.

The 2020 New Smyrna Beach Award Program emphasized in its release that it "focuses on quality, not quantity" and that Winners are determined based on the information gathered, both internally and from data data provided by third parties.

Fast Facts: The New Smyrna Beach Award Program is an annual awards program honoring the achievements and accomplishments of local businesses throughout the New Smyrna Beach area. Recognition is given to those companies that have shown the ability to use their best practices and implemented programs to generate competitive advantages and long-term value. The New Smyrna Beach Award Program was established to recognize the best of local businesses in the community. The organization works exclusively with local business owners, trade groups, professional associations and other business advertising and marketing groups. Its mission is to recognize the small business community's contributions to the U.S. economy.