DAYTONA BEACH, Fla. -- HeadlineSurfer.com endorses Rick Scott in his re-election because we belivee he has the Sunshine State headed in the right direction with a marked increase in job creation, record highs in tourism and an increasingly strong ciommitment to education.

Our endorsement should not come as a surprise connsidering we endorsed him in his maiden run for the state's highest elective office four years ago.

Contrary to what some Volusia County Republican operatives think, we have consistently maintained our conservative voice for six-plus years of around-the-clock online news coverage.

That conservative stance was reinforced in the 2012 presidential elections when we backed the GOP ticket of Mitt Romney and Paul Ryan, consiering this writer, publisher of the internet newspaper, was at the time a registered Democrat, who has since switched to NPA, principally because of the need to generate advertising and the tug-of-war with the two major parties.

And contrary to popular belief, one doesn't have to be a registered Republican to espouse conservative values. We have nothing against Republicans.

Our chief political columnuist, Dana Doughterty Swanson of DeBary, is a Florida Republican Committeewoman, and our second political columnist, Cory Thompson, is the former president of the Young Republicans of Volusia County.

Neither is a Headline Surfer® staffer and they are not paid for their contributed write-ups, but it does give them the opportunity to express their views. They understand that their political activities must be kept separate from what is published with HeadlineSurfer.com.

Swanson and Thompson made their cases for Scott along similr themes, but this endorsenent is the internet newspaper's official recommendation to the voters.

Admittedly, this endorsemet of Scott comrs with a cavaet, as was the write-up four years ago: "Reluctance."

That was the buzz word used in 2010, when Scott was a newcomer to the scene against popular Democrat Alex Sink.

But then that would defeat the purpose of endorsement to begin with.

"Neither!" was the choice of 35 percent or 815 votes of the overall 2,334 respondentents to the Headline Surfer® poll that asked, "Who is the better choice to lead Florida?" Gov. Rick Scott and ex-Gov. Charlie Crist finished in a virtual dead heat with each receiving 33 percent, though in terms of raw votes, Scott finished last with 759 voters to 761 for Crist.

The poll will continue through Monday.

There's no doubt, Florida's fortunes have improved under Scott's leadership. The economic gains reported by Scott's camp are impressive to say the least. Consider these economic indicators:

• Florida businesses have added more than 651,300 new private-sector jobs as of September 2014;

• The unemployment rate has dropped from more than 11 percent in December in 2010 to 6.1 percent today.

• Scott inherited a $3.6 billion shortfall from Crist's tenure and Florida now has a $1.2 billion surplus.

Consider still, Scott's record on taxes, which he cut more than 40 times, including sales tax holidays for school, hurricane supplies, and energy efficient appliances. Other tax reductions include:

Another significant achievement by Scott is efficiency of state government with less red tape. During the Scott Administration, more than 3,000 unnecessary regulations have been eliminated. And the average wait time for a professional license has decreased from 42 days to two days since 2008.

It is foolhardy to blame Charlie Crist for Florida's economic woes, considering the nation was entrenched in the worst recession since the Greeat Depresssion, and the Sunshine State was hit harder than other oppsrts of the country because of its reliance on tourism which was down.

Still, Crist has refused to even take partial responsibility for his role as governor for the econivc doldrums Florida was mired in.

And Crists's ever-changing party affiliation dors not bode well for building confidence that he would stay the course as demonstrated by his decision to leave the GOP and re-brand himself as an Independent when it becaome all troo painfully obvious that Marco Rubio was a force to reckon with in his quest for the U.S. Senate.

Then Crist turned to the Democratic Party in announcing his run to challenge Scott. Republicans have had a field day ever since tying him to Obamacare. 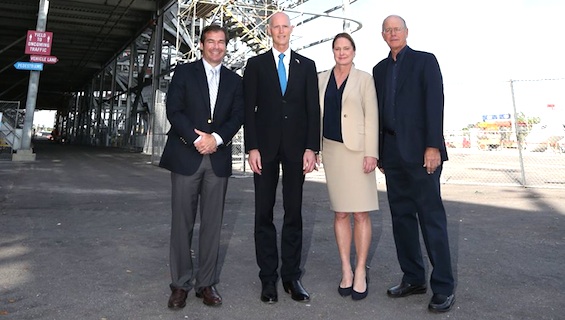 Photo for Headline Surfer® /
Gov. Rick Scott poses for thid photo opp with Daytona International Speedway President Jouie Chitwood, III, Lesa France Kennedy, head of International Speedway Corp., which owns Daytona ad 13 other tracks ans her uncle, Jim France, also an ISC official. The two Frances shown here also are principals in NASCAR, the sanctioning body of the stock-car racing sport that is highlighted by the Daytona 500. Scott signed legislation that gives the Speedway up to $90 million in taxpayer-supported subsidies towards its $400 million Daytona Rising modernization project. Gov. Scott is almost aklways shown with big wigs like the billionair France family as opposed to regular citizens during his visits to Daytona and other parts of the Sunshine State, giving him the image of being aloof.

Crist has his plusses too, which could tip the election in his favor. His ability to communicate -- to express himself and articulate the issues -- is far superior to Rick Scott, who seems less comfortable with the masses.

And thus Scott has earned the reputation of putting on airs -- deserved or not.

For example, when Scott comes to Volusia County, which continues to struggle with high taxes and a lack of jobs that pay decent wages -- Publix food stow and Wal-Mart are the two largest employers here -- he's often seen with influential insiders like Moretza "Mori" Hosseini-Kargar of ICI Homes and Lesa France Kennedy head of International Speedway Corp.

Scott made two key visits to Volusia County this election cycle -- for a photo pop with France-Kennedy and Daytona International Speedway President Joie Chitwood and for a fundraiser in New Smyrna Beach hosted by Hosseini.

This writer was fortunate to get 30 seconds with Scott in 2012 when he paid a visit to Daytona -- first to GOP headquarters in Holly Hill and then a luncheon ayr the Ocean Center where he called out the high profile people like retiring State Sen, Evelyn Lynn, R-Ormond Beach, Sheriff Ben Johnsonm, a Republican whose office is non-partisan and he went out of his way to pay tribute to Hosseini.

Despite these shortcomings, Scott has accomplished far more in his first term than Crist did in his four years as governor. Is there reluctance? Yes, we acknowledged that early on in this write-up. But Rick Scott has been good for Florida.

There's the worn-out cliche in politics that asks, "Are you better off than you were four years ago? The answer unequivocally is "yes."

That's the litmus test. And Rick Scott has passed it.

With all of the above said, we believe we have made the case for returning Rick Scott to the governor's mansion in Tallahassee for another four years.

Editor's Note: Here is the list of other Florida-based media outlets that issued an endorsement for governor: