Photo for Headline Surfer / Buddy Dyer has reason to smile as Orlando's mayor, with a 21% raise he voted and his elected colleagues voted for that will bring his salary to nearly $200,000.

ORLANDO -- Like a lot of politicians, Orlando Mayor Buddy Dyer knows how to play the role. He leads his meetings in the pledge of allegiance and has his photo-shopped image taken in front of the American flag, smiling, of course. He's not alone.

Dinneen, is pressing for a 10 percent tax increase for the proposed $575 million county budget in the new fiscal year that begins Oct. 1. Dinneen makes $213,792.54.

Gummey may very well be the highest paid municipal employee in the United States. He makes far more than Volusia County Attorney Daniel Eckert, who is paid $187,406. The difference is, New Smyrna Beach has less than 23,000 people while Volusia County has nearly 495,000.

It's unmistakable that in these tough economic times, County Manager Dinneen should be setting an example by giving back 10 percent of his salary as an example, but that won't happen.

Dyer isn't all that real -- almost plastic-like. But what is all too real about the likes of Mayor Dyer is his lust for the All-American dollar.

How Buddy Dyer can even look taxpayers in the eye with a 21 percent hike in pay speaks volumes as to the greed and hypocrisy of elected politicians and government bureaucrats alike. After all, Dyer and and his elected colleagues on the Orlando City Council are taking the taxpayers to the cleaners with their whopping 21 percent pay raises.

How Buddy Dyer can even look taxpayers in the eye with a 21 percent hike in pay speaks volumes as to the greed and hypocrisy of elected politicians and government bureaucrats alike. After all, Dyer and and his elected colleagues on the Orlando City Council are taking the taxpayers to the cleaners with their whopping 21 percent pay raises.

Bravo to the Orlando Sentinel for being first in reporting the story.

Being an online-only operation, and a small one at that, HeadlineSurfer.com topped the Google News Directories early this morning with our own version of this disgusting money grab by Dyer & Company. The exciting thing for us is how this demonstrates the power of the internet and the immediacy at which our news gets out to a media-hungry 21st century digital readership.

Unlike the print dailies like the Sentinel, Florida Today, the Daytona Beach News-Journal, the S. Augustine Record, the Palatka Daily News, the Ocala Star Banner, the Leesburg Daily Commercial and others in Central Florida, their digital versions are not free. HeadlineSurfer.com is and that is what we're banking on. As more and more people discover us, hopefully, advertisers will get it and buy into our product.

We've certainly been punished in the first five years publishing in New Smyrna Beach with vindictive politicians like Mayor Adam Barringer calling on his merchant friends to cancel their ads with us, which is why we left for the greener pastures of Lake Mary and a larger terrain from which to draw advertising.

The New Smyrna municipal government led by Barringer and City Manager Pamela Brangaccio is corrupt. We don't need multiple complaints piling up with the Florida Commission on Ethics to reinforce that label.

Headline Surfer / New Smyrna Beach City Manager Pam Brangaccio and Mayor Adam Barringer (shown far left and center), enginerered a sweetheart retirement deal in October for then-Police Chief Ronald Pagano, who retired with an extra $70,000, despite a theft scandal in the NSBPD. Both Brngaccio and Barringer are being investigated by the Florida Commission on Ethics on multiple charges.

In New Smyrna Beach, the salary rankings have changed. Gummey, of course, remains No. 1. But Brangaccio with her $125,000 salary drops to third. That's because she and the mayor orchestrated a sleazy contract arrangement for then-Police Chief Ronald Pagano, back in October, to retire with an additional payout of nearly $70,000, bring his 2012 year-end salary to close to $180,000.

Why? Because the evidence room scandal (940-plus missing or stolen items including $8,00 in cash, firearms, ammo, narcotics, jewelry,electronics and as many as 30 automobiles) at the New Smyrna Beach Police Department was on his watch. Brangaccio was able to keep that dirty secret under lock and key for nearly five months until Headline Surfer broke the story wide open.

It is so typical of politicians to take advantage of the taxpayers. As an experienced bureaucrat, Brangaccio knows all too well how to play the game. Apparently Buddy Dyer does, too.

I know of no one who has gotten a 21 percent raise in the real world aside from professional ball players. Ands that's purely a function of the private marketplace. But in public service, public servants aren't supposed to gouge the taxpayers liker this. It's an absolute disgrace.

Then again, as we've witnessed in Volusia County, there are some who make even more than Dyer and that's without significant raises.

So, the next time Jim Dinneen tells you how important it is for the county not to use up its reserves, or New Smyrna Beach Mayor Adam Barringer whines how reporters are picking on him, or Orlando's Buddy Dyer tells you how he's working hard for you, remember what's in it for them. 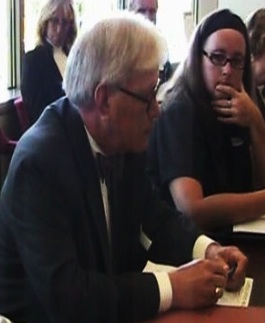 Headline Surfer photo by Serafina Frederick / New Smyrna Beach Ciry Attorney Frank Gummey is shown here in this 2009 file photo from Tallahassee, seated next to city Planning Mansger Gail Henrickson, sports one of his array of fancy silk bow ties. Gummry makes $215,000 a year as the lead municipal attorney for a city less than 24,000 residents.

The bow tie on Frank Gummey may look silly to you or me, but like one of those creepy clowns, he and the others in government are laughing all the way to the bank.

And in Gummey's case, that Corvette eats up quite bit of gas. But then again, he's got plenty of money to burn.

Few would argue that now wouldn't they?