Overkill: 65 cops, a tank-like vehicle and 2 SWAT teams against a lonely drunken man who never pointed a weapon at anyone 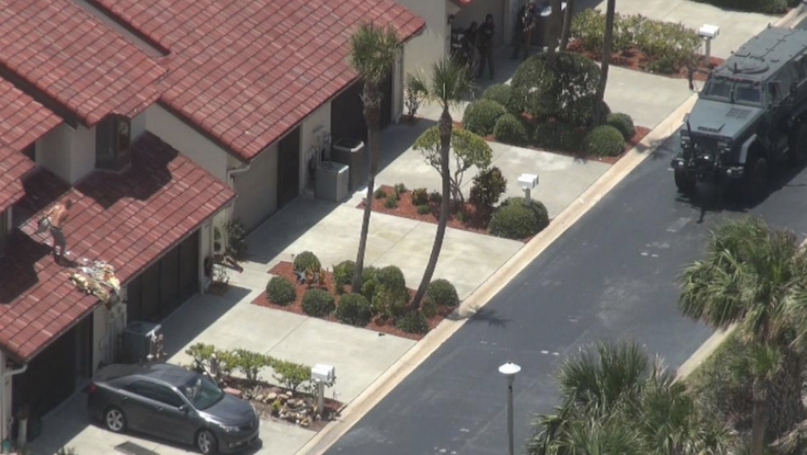 Photos for Headline Surfer / Craiig Trover, 36, is shown below in a mugshot from a prior incident in January at his townhome where was charged drunken disorderly conduct. Trover is shown above on the roof as a large mlitary-style vehicle waits down the street in a posh neighborhood just a couple blocks from the ocean in Daytona Beach Shores.
By HENRY FREDERICK / Headline Surfer

DAYTONA BEACH SHORES, Fla. – Sunrise was still 10 minutes from peeking through when the ebb and flow sound of the rolling surf on the far side of A1A was interrupted by the loud shrieking screams of a man with his cell phone in his left hand and a 12-ounce can of Budweiser in the other.

“(Expletive) you! You’re just so (expletive) demanding” said Craig Trover, 36, dressed only in a pair of bright red boxers, as he tossed his phone into the yard from the doorway of his two-story townhome, less than a block in from Sea Oats Circle and away from Atlantic Avenue where towering condos block the ocean view.

Several neighbors down the street yelled back for him to be quiet and let them sleep in peace.

But there would be no peace as the sun was rising and two cop cars came barreling in from A1A and Trover snatched up hid phone and ran inside.

“He’s got a gun,” a neighbor across the street shouted to the responding officers who ended up retreating to their squad cars. Within 10 minutes the place was crawling with police and the first of two SWAT teams.

Cops had been to his residence back in January when his sister and her husband and baby were living there, too. Their mom had died the previous summer and there was friction over ownership. With Trover a heavy drinker, the sister and her family moved out.

Trover was arrested in that earlier incident and charged with drunken disorderly conduct. He bonded out of jail the next day. Back to the apparent standoff, and it was an ex-girlfriend who set him off this time around, Trover said in an exclusive sit-down interview at a small steakhouse where he was treated to lunch a couple miles north from his residence. He readily acknowledged he often drinks to excess since he’s by himself and works out of the residence doing telemarketing to get by with the bills and keep the home afloat.

Trover, a thin man with light brown hair, said he wanted to surrender until he saw a large truck pulling a large vehicle, which turned out to be an 8-ton tank-like military machine.

Most of the nearby units were evacuated and a half-mile stretch of the main road was re-routed onto side streets.

Trover’s battery on his phone died as morning gave way to mid-day. His power had been cut off and he was sweating profusely. Cops motioned for him to pick up a fresh phone battery, by a window where he had dropped it apparently overnight while drinking and twirling it.

Before sundown, cops threw what appeared to be a cheap flip phone near the rifle, but Trover did not go outside to retrieve it.

“That’s what they wanted me to do so they could use an excuse that they saw me reaching for the rifle,” Trover said. “It’s suicide by cop,”

But with Trover nodding off as the nighttime hours started accumulating, cops made a hole though a willing neighbor’s garage and Trover was pinned on his couch, cuffed and transported to Halifax Heath Hospital where he would be Baker-Acted and held for three days.

Cops recovered a handgun in addition to the rifle that was inoperable to begin with. Trover was not charged. His handgun was returned to him.

“I just thought the whole thing was overkill," Trover told Headline Surfer. "They even had that tank."

Cops recovered a handgun in addition to the rifle that was inoperable to begin with. Trover was not charged. His handgun was returned to him.

“I just thought the whole thing was overkill," Trover told Headline Surfer. "They even had that tank."

Daytona Beach Shores declined to comment, instead issuing a press release saying no lives were lost as a result of a “strong show of force” and being patient.

The standoff was finally over 18 hours after it began.

Requests for expenses incurred that day were still being tallied police said.