Rookie Sheriff Mike Chitwood got a $54,000 job for his gal-pal campaign mgr and a $280K armoured vehicle is budgeted, but what he most desires is control of Beach Safety & the Branch Jail 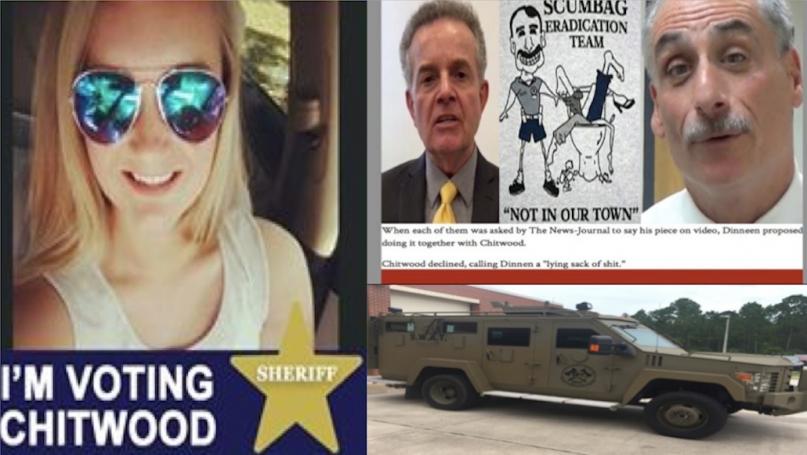 DAYTONA BEACH, Fla. -- County Manager Jim Dinneen has given rookie Sheriff Mike Chitwood lots of goodies since he took office on Jan. 1: In fact, Daytona's former top cop was able to reward his bright young gal-pal campaign manager, Janelle Homan, with a plumb job as a PR specialist shooting videos and feel-good pics with a salary of $54,000 a year, a whopping 20 grand more than what a starting deputy would make if Chitwood were to actually hire one.

And get this: Homan started her new job on Jan. 1, the actual holiday, no less.

It's not as if he needed anoher public relations flak, since he already had three handsomely-paid civilians in Gary Davidson, paid just shy of $99,000; Judie Edwards, earning $60,000; and Andrew Gant, hired away from the Daytona Beach News-Journal at $50,000. Ironically, Gant nearly doubled his pay in the public arena as opposed to his former role in the private sector as the newspaper's Volusia County government reporter. All three PIOs were there before Chitwood arrived. But when he did, Homan was right there with him.

The combined salaries for the three PIOs, plus Homan accounts for $263,000. That's enough dough to hire at least seven entry-level deputies at $35,000 apiece. And although Davidson finally retired recently after 23 years -- first with Bob Vogel for six years, then Ben Johnson for 16 years and Chitwood for nearly seven months -- Chitwood is said to be looking to hire another civilian to replace him.

Homan is right around the corner from Chitwood on the fourth floor of the county administration building. She reports to Chitwood's hand-picked chief deputy, John Creamer, who came over from Daytona with him.

And as if Homan's job isn't cushy enouh, a female deputy has recently been assigned to accompany her wherever she goes to do her promotional assignments. That means yet another deputy with a gun and a badge is off the vitally  needed road patrols, especially in Deltona, which is becoming more violent.

When Chitwood started, the VCSO was short 50 deputy positions. Within the first week of August already in the rear window, the number of deputy openings has swelled to 65. So as Chitwood shamelessly burns valuable resources on his self promotion, it's the citizens who are being shortchanged.

The elected politicians on the dais are bending over backwards to pacify Chitwood with expensive toys like the budgeting of a $280,000 armoured vehicle. And there is the behind the scenes politicking to try and further pacify him by considering his thirst for more power by giving him control of the beach patrol. Even before Chitwood took office, he was bellyaching over Dinneen's willingness to let him take his cheeap compressed-wood desk home with him.

Chitwood threatened he would set up milk crates rather than the county giving him a new desk. Johnson left the desk in place. It would take long for Chitwood to go full throttle -- actually being quoted in the News-Journal as labeling Dinneen a "lying sack of (expletive).