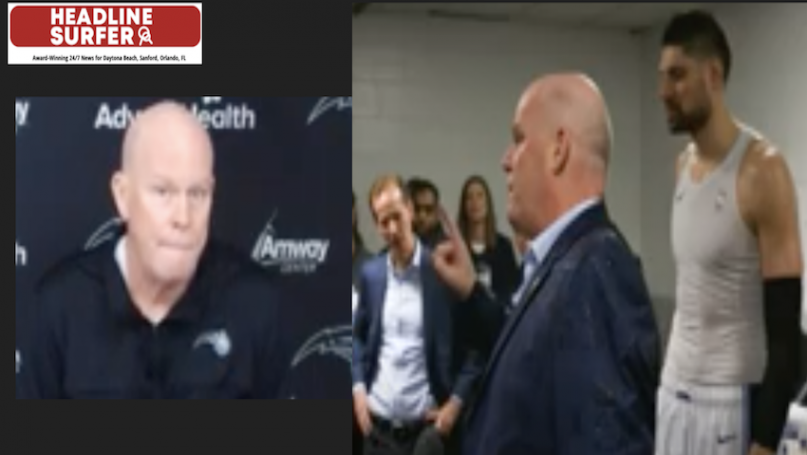 {Photos for Headline Surfer / Steve Clifford, at left inset, and shown in the larger image addressing the Orlando Magic squad during the latter part of the 2019-2020 season in the Bubble at Disney, due to COVID-19 lockdown precautions. Shown behind Chifford is Nikola Vucevic, the NBA All Star center, who was traded to the Chicago Bulls during this past season's NBA Trading deadline. Evan Fournier and Aaron Gordon were also shipped out by the Magic. Cliffortd followed the trio out the door on Saturday.

ORLANDO, Fla. -- The rebuild of the Orlando Magic continues with today's departure of head coach Steve Clifford described as a mutually-agreed upon decision, acccoring to Jeff Weltman, president of basketball operations.

“We would like to thank Steve for his contributions to the Orlando Magic,” Weltman said. “We appreciate the many sacrifices he has made as our head coach and understand the timeline of our new path does not align with his goals as a head coach in our league.”

Clifford, in return, issued the following prepared stattement:“I would like to thank the DeVos family, Magic leadership and the entire staff, and certainly wish everyone well. It’s been an honor and privilege to coach this team in this community.”

Clifford was named the Magic’s 14th head coach on May 30, 2018. During his three seasons in Orlando, the Magic had a 96-131 record with two playoff appearances. In his eight seasons coaching Charlotte and Orlando, Clifford was 292-345.

According to the Magic, Clifford in his first season with Orlando, guided the team to a 42-40 record (.512) and a 17-win improvement, which was the largest turnaround in the NBA and the second-biggest improvement in franchise history. The Magic clinched a berth to the 2019 NBA Playoffs for the first time since 2012 and captured the Southeast Division title, the franchise’s first since 2009-’10.

But the team's fortunes were shortlived by the third season with Clifford at the helm, going 96-131 with the franchise and making the playoffs twice during his tenure. He had one full season remaining on the four-year contract he signed in 2018.

The Magic finished the 2020-21 season at 21-51, the league's third-worst record and last in the Southeast Division. Orlando started the season 5-2 before star guard Markelle Fultz tore his ACL in January and missed the remainder of the season.

The team also dealt with injuries to forward Jonathan Isaac and others throughout the season. During the NBA trade deadline in March, Orlando traded All-Star center Nikola Vučević, Evan Fournier and Aaron Gordon in exchange for two first-round picks from the Chicago Bulls and one first-round pick from the Denver Nuggets.

In Orlando, Vučević was averaging 24.5 points and 11.8 rebounds per game, shooting 40.6% from three-point range.