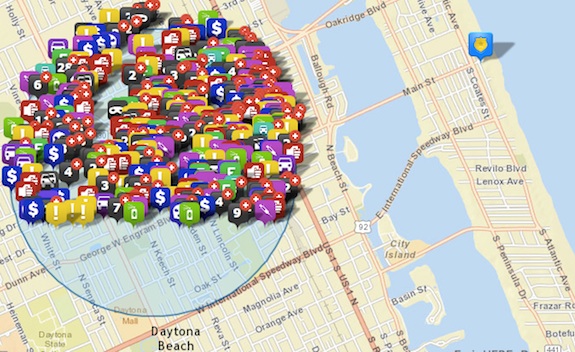 Photo and graphic for Headline Surfer® / Brenda Reynolds, shown here at left in a booking mug, is being held without bail at the Volusia County Branch Jail on a second-dsegree murder charge in connection with the stabbing sdeath of a woman in her residence at 847 N.orth St. The electronic map shows more than  crimes in the past year within a 1-mile radius of the residence.

DAYTONA BEACH -- The continuing violence that has gripped this city for the better part of four years now continued Friday night with a woman plunging a large steak kniife into the upper chest of a friend in her bedroom.

Cops who responded to a 9-1-1 call at a residence at 847 North St in the heart of this tourism city that is home to Daytona International Speedway and the "World's Most Famous Beach" found the deceased 60-year-old woman with the mortal wound clearly visible. She apparently pulled the knife out of her own chest and then died, homicide detectives said.

The victimm, Emma Sue Williams succumbed to the single knife plunge, allegedly at the hands of  the residence's owner, 53-year-old Brenda Reynolds who was arrested and booked in the Volusia County Branch Jail on a charge of on a charge of second-degree murder.

Reynolds had asked the victim's cousin, Ruby Young, to bring her some water because the water was turned off at the house, according to a police report.

Cops said when Young came back to the home, Reynolds was at the front door with a knife in her hand yelling that she "just killed the bitch."

Reynolds denied having anything to do with the killing when she was interviewed by homicxide detectives, but police said she had blood on her hands and on her right slipper and that was probavle cause to effect an arrest, along with the witness statement as to her own words in acknowledging taking the woman's life.

Neighbors who asked not to be identified said they are growing increasingly concerned about growing violence in a city with people struggling to survive without decent jobs and the proliferation of drugs and guns. In this case, a situation where the water was turned off because the accused killer couldn't pay the bill may have likely played a part in her sudden rage, neighbors said.

While the City of Daytona Bewch has placed great emphasis on big projects like a Hard Rock Hotel and massive projects at the Speedway residents say they aren't seeing anything done to maje their lives btetter and the violence continues around them with no signs of letting up as demonstrated in the crime mapping in differet parts of the city, both on the beachside as well as the traditional inner city neighborhoods where many poor residents are struggling to make ends meet.

Even in the heart of the tourism district on the beachside, violent crime is getting tougher to keep out of the headlines. One of the most violent sections of Daytona Beach is within a one-mile radius of the Ocean Center, 101 Atlantic Avenue. Even the area around Daytona International Speedway isn't immune from crime.