2020 PRIMARY RESULTS: Abby Sanchez wins re-election to the Seminole County School Board with 63.11% of the votes 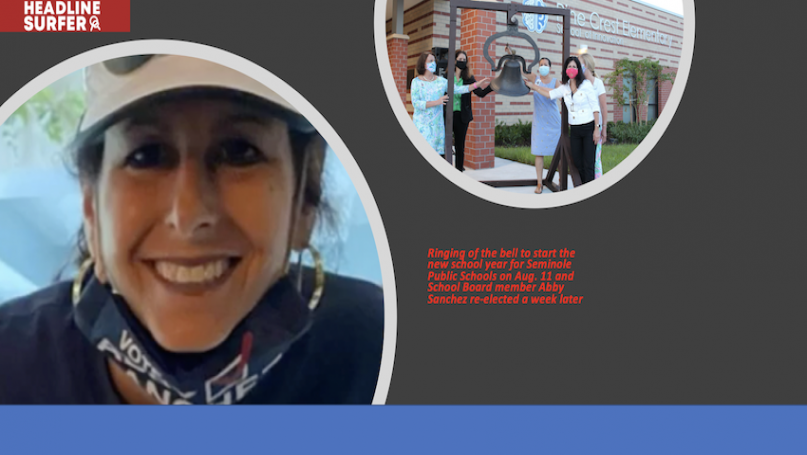 Headline Surfer photo illustration / Seminole County Public Schools opened up the school year on Aug. 17, 10 days later than scheduled due to the ongoing coronavirus pandemic. Incumbent School Board member Abby Sanchez, shown above left was the lone seat in the Aug. 18 primary, which she won.

SANFORD, Fla. -- Abby Sanchez was re-elected to the Seminole County School Board for a second four-year term with 63 percent of the votes over challenger Veronica King for the district 3 seat in Tuesday's primary election.

Sanchez, 53, of Longwood and mother of three grown children who attended Seminole Public Schools, garnered 48,116 votes or 63.11 percent of the votes to  28,126 votes or 36.89 percent for challenger Veronica L. King, who works for the mayor of Eatonville.

King, 45, who lives in Altamonte Springs,  is a longtime community volunteer for organizations such as the National Coalition of 100 Black Women. She is the mother of two grown children who attended Seminole’s public schools. This was her first run for public office. She raised $6,500 in campaign revenue while Sanchez generated nearly $18,000.

King, works for the mayor of Eatonville  sought public office for the first time in this election cycle.

Sanchez, a former longtime school teacher, is a former teacher,PTA member, and school volunteer,  initially ran for the district 3 seat four years ago and won.

Seminole County Schools started the school year on Aug. 11, 10 days later than scheduled due to the COVID-19 pandemic.