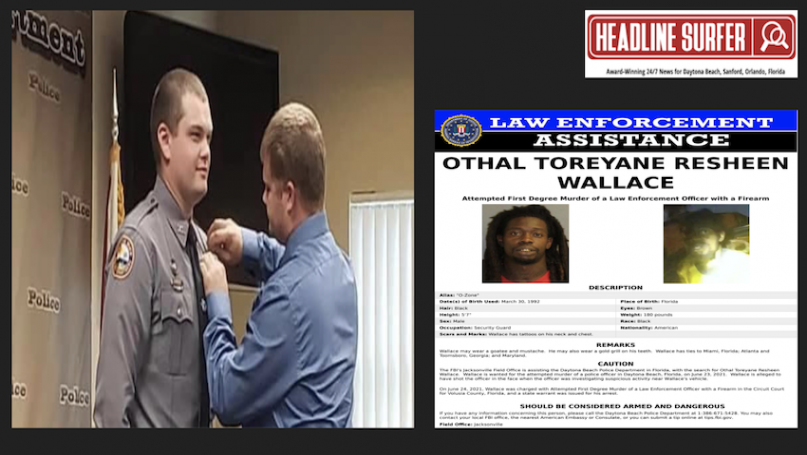 Headline Surfer photo illustration / Jason Raynor is shown at left in a pinning ceremony with his hiring by the Daytona Beach Police Department two years ago having previously worked as a Port Orange cop for four years. At right is a bulletin from the FBI field office in Jacksonville announcing it is now assisting DBPD in the criminal apprehension of Othal Toreyane Resheen Wallace, who is wanted on an active warrant for alleged attempted murder in the shooting of Raynor during a brief encounter Wednesday night.

DAYTONA BEACH, Fla. -- A little more than 48 hours after Daytona Beach police officer Jason Raynor lay in a pool of his own blood outside a housing development when he was shot by an armed gunman.

Local and county law enforcement leaders have said Raynor was shot in the head and fighting for his life at Halifax Hospital, but they refused to give specifics on where in the head he was shot. But earlier tonight, Daytona Beach police released a flyer from the FBI, which was specific.

"The FBI's Jacksonville Field Office is assisting the Daytona Beach Police Department in Florida, with the search for Othal Toreyane Resheen Wallace. Wallace is wanted for the attempted murder of a police officer in Daytona Beach, Florida, on June 23, 2021. Wallace is alleged to have shot the officer in the face when the officer was investigating suspicious activity near Wallace's vehicle."

On June 24, 2021, Wallace was charged with Attempted First Degree Murder of a Law Enforcement Officer with a Firearm in the Circuit Court for Volusia County, Florida, and a state warrant was issued for his arrest.

The FBI in the bulletin said >On June 24, 2021, Wallace was charged with Attempted First Degree Murder of a Law Enforcement Officer with a Firearm in the Circuit Court for Volusia County, Florida, and a state warrant was issued for his arrest."

Headline Surfer made a public records request early Friday morning in writing requesting a copy of the DBPD "incident report" or a CAD report, both of which provide brief, but specific information such as time of incident and response by law enforcement.

Headline Surfer also asked for a copy of any warrant sought or signed off on by a circuit judge.

Neither of these basic public records requests have been fulfilled.