Headline Surfer video / Crime-scene and fatal shooting scenario where 17-year-old Adrein Green, a former University High School student and football player in Orange City, was killed by a single gunshot to his back by the homeowner while the teen was trying to break into one of two vehicles within the fenced-in and gated yard on Garrison Drive early Tuesday. 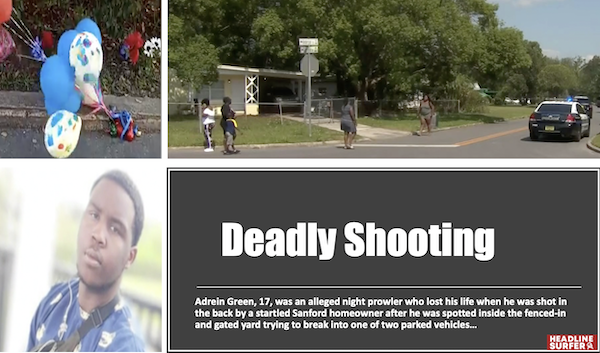 SANFORD, Fla. -- A 17-year-old boy was shot in the back and killed overnight by a homeowner within his fenced-in and gated yard in what Sanford cops are calling a justified homicide due to a burglary in progress.

Adrein Green was transported to Central Florida Regional Hospital in Sanford where he was reported dead on arrival in the emergency room from a mortal gunshot wound in the back outside the residence on Garrison Drive in Sanford.

Here is a synopsis of what occurred describe by Sanford cops: At 1:12 am, police received a 9-1-1 call reporting a suspicious incident and possible home burglary in progress.

The caller reported that his wife had woken him because she heard noises outside of their home. He then grabbed his  9 mm semi-automatic handgun while he went to the front door to see what all the commotion was outside.

As the homeowner opened the door, he saw an unknown person on the inside of the fencing of his front yard inside the front yard fencing. The suspect, later identified as Adrein Green, was between two vehicles in the driveway. The homeowner yelled at the suspect and fired two rounds - one of the shots striking the teen in the back.

The teenager never entered the home and was 18-2020 feet from the front door, cops said, but considering it was the middle of the night, it was shoot and ask questions later.

“He faced me and I got super scared,” the homeowner told the 9-1-1 operator, adding he feared for the safety of his wife and their newborn baby.

The wounded teen ran out of the yard where responding cops found him unresponsive in the road, a short distance from the home. Officers performed CPR to no avail. Adrein Green was pronounced dead on arrival in the Sanford hospital's ER - the result of the gunshot wound to his back.

The investigation into the incident is ongoing. A preliminary review of the case is being conducted by the State Attorney, but no charges are expected against the shooter.

Sanford cops did not release the homeowner’s name or specific address on Garrison. Sanford police spokeswoman Bianca Gillett said the information was being withheld under Marsy’s Law.

Police Chief Cecil Smith said at a press briefing mid-day Tuesday that Adrein was using a rock and a car battery to try to break into one of the the homeowner's vehicles, with marks on the window consistent with an attempted burglary.

Regardless of what the teen may have done, he didn't deserve to die, said several relatives who dropped off balloons on the opposite side of the road - near where he collapsed and died.

One of them, a great aunt, Lillian Wright, didn't mince words in speaking briefly to camera crews with WKMG Ch. 6 and WFTV Ch.9, saying the homeowner went too far: “He shot him in his back like a dog! We need justice in this case... Our family was in an uproar this morning -- 17 years old! His mom is destroyed right now. Her baby has gotten killed!" 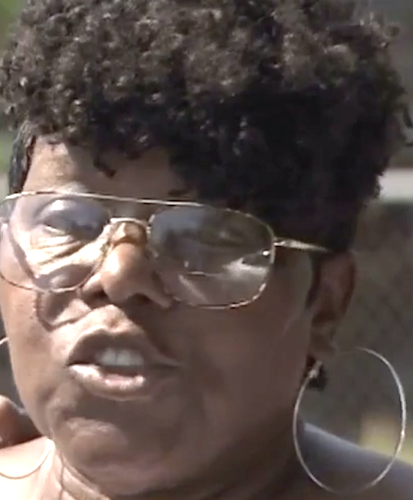 Regardless of what the teen may have done, he didn't deserve to die, said several relatives who dropped off balloons on the opposite side of the road - near where he collapsed and died.

One of them, a great aunt, Lillian Wright, didn't mince words in speaking briefly to reporters, saying the homeowner went too far: “He shot him in his back like a dog! We need justice in this case... Our family was in an uproar this morning -- 17 years old! His mom is destroyed right now. Her baby has gotten killed!"

Wright said the deceased teen was a student at University High School, but Sanford police said he was not in school any more.

"He does not have a permanent address as he was not living with relatives anymore, and staying with random friends or associates," Sanford PD spokeswoman Bianca Gillet told Headline Surfer.

Kelly Schulz, spokeswoman for Volusia County Schools, to whether Adrein Green was enrolled at University High School of if he was still a student there, she stated, "I can’t answer because of student privacy laws."

He does not have a permanent address as he was not living with relatives anymore, and staying with random friends or associates.Police Chief Smith, along with Seminole County Assistant State Attorney Dan Faggard, said after interviews with the homeowner and his wife, as part of their their preliminary investigation, they agreed there would be no arrest nor any likely are charges filed against the homeowner.

In fact, all that awaits closing the investigation is the filing of the autopsy report by the medical examiner.

Assistant State Attorney Faggard said that because the teen was on the property of the homeowner and was trying to break into one of his cars - considered a forcible felony - the homeowner was justified in fatally shooting the teen.

“(The) man indicated that he was in fear of his life but mostly for his newborn child and his wife who were in the home,” Faggard said. “We have to find there is probable cause to believe that the individual did not act in self-defense or justifiably. That’s a very high standard. Currently, we’re not able to make that determination and therefore he was not arrested this morning.”

Police Chief Smith added, "This is a unique situation, a tragic situation...No one wants to see a young person lose their life in such a tragic manner.”

Neighbors along the side street lined with older single-family homes were reluctant to talk to a reporter about the fatal shooting. Several neighbors who spoke on condition their names would not be used, said they didn't hear the shots, though several said their children were awakened by the sound of gunfire.

However, nobody ventured outside until after cops and an ambulance arrived and a portion of the roadway and the property where the shooting occurred were cordoned off with yellow police tape.

Anyone having additional information on this homicide is asked to call Crimeline at 800 423-TIPS (8477) or visit www.crimeline.org. Calls made to Crimeline remain anonymous, and tips to Crimeline that lead to solving a felony case are eligible for a cash reward of up to $5,000.

Henry Frederick is publisher of Headline Surfer, the award-winning 24/7 internet news outlet launched 12 years ago that serves greater Daytona Beach, Sanford & Orlando, Florida via HeadlineSurfer.com. Frederick has amassed more than a hundred journalism industry awards in print & online -- more than than all other members of the working press combined in Central Florida since the mid-1990s. He earned his Master of Arts in New Media Journalism with academic honors from Full Sail University in 2019. Having witnessed the execution of serial killer Aileen Wuornos in Florida's death chamber and other high profile cases, Frederick has appeared on national crime documentary programs on Discovery ID and Reelz for his investigative reporting and cops & courts breaking news stories.