BREAKING NEWS: Sanford firefighter on paid admin. leave while city investigates his role in pro-Trump deadly riot at the US Capitol building 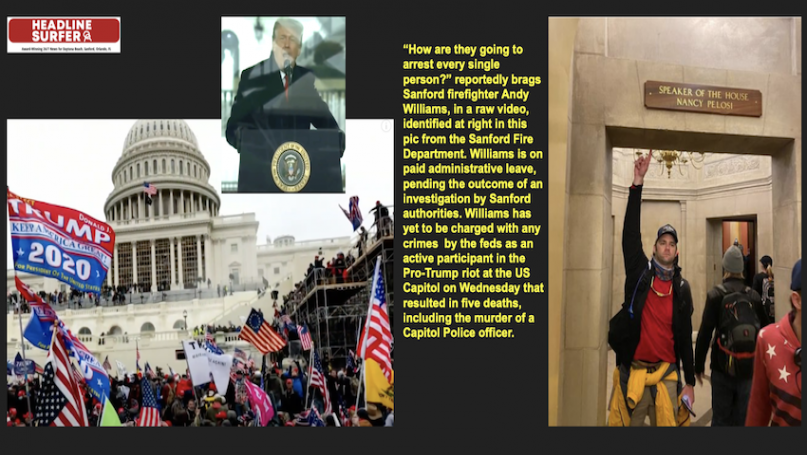 SANFORD, Fla. -- A Sanford firefighter has been placed on paid administrative leave while city authorities investigate his apparent role in Wednesday's deadly riot at the Capitol building Wednesday night after two raw videos were anonymously sent to the Orlando Sentinel showing he was an active participant.

At one point in one of the videos, fighter Andy Williams is heard in a bragging way asking, "“How are they going to arrest every single person?”

Sanford Police and Fire Department spokeswoman Bianca Gillet confirmed Williams, who has been a city firefighter since 2016, has been placed on administrative leave by the City of Sanford, pending the outcome of an investigation by Sanford authorities.

Sanford Fire Chief Craig Radzak told a reporter with WKMG Ch 6 Orlando that Williams was traveling back to Florida on Thursday and has been notified that he’s been placed on leave with pay. Radzak did not comment further.

Radzak could not be reached for comment by Headline Surfer this afternoon.

The Orlando Sentinel in a story posted 2:59 p.m. today, and headlined, Videos appear to show Sanford firefighter amid Capitol mob: ‘We are storming the Capitol!’, shows a video that is a a little more than a minute long.

At one point, Williams states on one of the posted video, "We are storming the Capitol!" with the Sentinel writing in part (shown here in italics):

That exclamation and others are heard in a pair of videos leaked to the Orlando Sentinel which appear to show a Sanford firefighter boasting as he marches through the U.S. Capitol during the riot there Wednesday.

The Sentinel story adds, in part (shown here in italics):

“How are they going to arrest every single person?” the man filming the videos says in one of the clips, while making his way toward the rotunda. The man appears to be the same person the Sanford Fire Department on Thursday identified in a photo as paramedic and firefighter Andy Williams.

SFD on Thursday was made aware of a photo showing Williams

The Sanford Fire Department was made aware of a photo on Thursday showing city firefighter Williams under a placard at the entrance of House Speaker Nancy Pelosi’s office in the Capitol while wearing a Trump 2020 hat, city spokeswoman  Gillett told Headline Surfer. Headline Surfer and other Central Florida daily media outlets have since posted the incriminating pic.

Gillett declined to comment if the Sanford Fire Department or city authorities had alerted federal officials about Williams’ participation in the pro-Trump storming of the Capitol building.

The Sentinel reported in its story thids afternoon that earlier in the day received an anonymous email with the two videos, which appeared to through scaffolding in front of the Capitol with hundreds of pro-Trump rioters, then walking through the halls of the Capitol during the violent takeover.

The Sentinel said it was not able to confirm the source of the videos or get in touch with Williams, but added  the person recording the video flips the camera around to show his face, which mstches the photo of Williams released by the SFD on Thursday.

In the first, 47-second video, the videographer who appears to be Williams, yells, “We are storming the Capitol, yeah baby! ... Woohoo! We’re doing it, we’re actually doing it!”

He keeps the video running as he and everyone around him crawl over and through scaffolding and up a stairway. He scans the crowd while saying, “This is our building.”

The second video shows a long marble hallway crowded with pro-Trump extremists. The man recording yells, “Taking it back, baby!” He again flips the camera to show his face and says, “We are inside the Capitol!”

Nearly half a dozen Florida citizens have been arrested on charges in connection with the Capitol riot:

Several Florida men are among those arrested by the feds and announced Friday by the FBI:

• Matthew Council, of Riverview, FL, is charged with knowingly entering or remaining in any restricted building or grounds without lawful authority and violent entry and disorderly conduct on Capitol grounds. Council allegedly unlawfully entered the Capitol building, and when stopped by law enforcement, he physically pushed an officer. Council was arrested Wednesday by Capitol police.

• Michael Curzio, of Summerfield, FL, is charged with knowingly entering or remaining in any restricted building or grounds without lawful authority; or knowingly, with intent to impede government business or official functions, engaging in disorderly conduct on Capitol grounds; and violent entry and disorderly conduct on Capitol grounds. Curzio was arrested Wednesday by US Capitol police initially on a charge of unlawful entry.

Another Florida man, Adam Christian Johnson, of Parrish, was identified by numerous people as the person photographed carrying a House lectern while walking and grinning through the Capitol rotunda. He has yet to be charged.