DAYTONA BEACH, Fla. -- For the third time in the last two months, the Daytona Beach Police Department made arrests following an early-morning raid on a beachside property which has been the source of numerous drug-related complaints from the Daytona Beach community.

Members of DBPD’s Problem Oriented Policing and Special Weapons and Tactics units took four people into custody just before 6 a.m. today after a search warrant was served at 612 Ribault Ave.

Cops also seized 63 grams of methamphetamine and various kinds of drug paraphernalia found inside the home during the raid.

“We’d like to thank the community for continuing to provide tips about drug houses like the one we entered this morning,” said Scott Lee, the DBPD captain who oversees the POP Unit. “Just letting us know what you see may seem like a small thing, but it’s really not. It allows us to build solid cases, put these kinds of people behind bars and improve the quality of life for residents.”

The following individuals were arrested and taken into custody during this morning’s raid:

Derrick Goodin, 23, and Moises Ocasio, 46, were both charged with resisting arrest without violence. 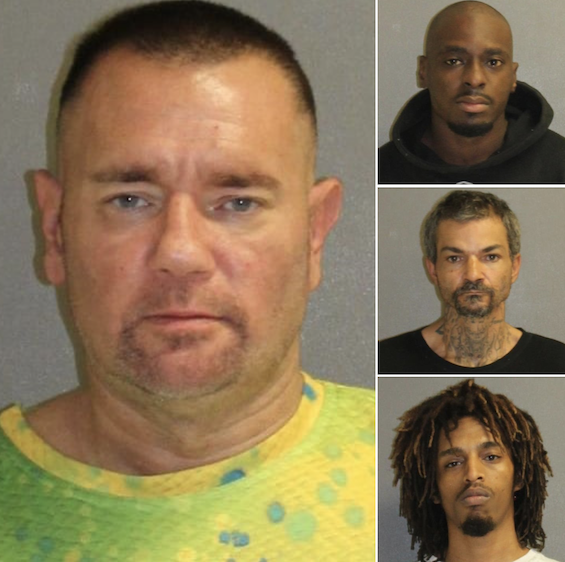 The following individuals were arrested and taken into custody during this morning’s raid: Christopher Schmahlenberger, 47 (shown in larger pic), and Johnnie Staley, 22 (shown) bottom right, were both charged with trafficking in methamphetamine, unlawful possession of drug paraphernalia, maintaining a place where controlled substance is illegally kept and unlawful possession of a schedule II substance. Derrick Goodin, 23 (shown top right), and Moises Ocasio (shown middle right), 46, were both charged with resisting arrest without violence.

POP and SWAT units also teamed up twice in December to execute similar search warrants at two motels: the Best Southern Sun Plaza Motel on 1011 S. Ridgewood Ave. and the Camellia Motel on 1055 N. Atlantic Ave. Ten people were arrested on a variety of charges following those raids, mostly drug-related.

Those who would like to report similar problems in their neighborhoods are encouraged to contact Daytona Beach Police Department POP Unit Sgt. Kevin Connelly at ConnellyKevin@DBPD.us or 386-671-5162.