Ed Kelley retires from chairmanship of Volusia County at year's end; Jeffrey Brower his successor with win in 2020 elections 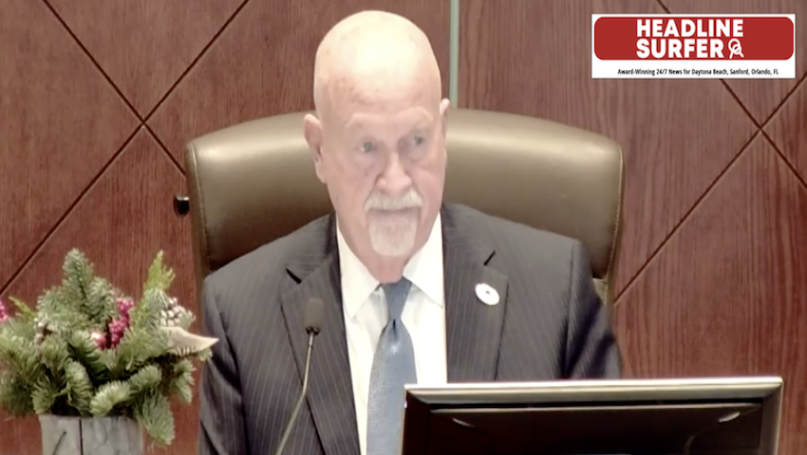 Photos for Headline Surfer / Above: Ed Kelley of Ormond Beach chairs his final meeting of the Volusia County Council on Wednesday Dec. 15 in DeLand, Florida. At left: Appearing at the same meeting is Kelley's successor, Jeffrey Brower, of DeLeon Springs.

Prior to that, Kelley was the elected mayor of Ormond Beach fpr six years untiol 2016 when he defeated four-year incumbent Jason Davis in 2016 for the county council chairmanship.

Kelley had a difficult four years dealing with infighting on the council - most notably with Councilwoman Heather Post and from Sheriff Mike Chitwood, both instruimental in forcing thje resifnation og Jim Dinneen as county manager two years ago while both also were midway through their first terms in public office.

Asked if he had any parting shots for either of them when reached Thursday by text message (his preferred mode of contact with a reporter), Kelley said, "If I had wanted to say anything, I would have done it on the 15th."

The 15th of December was the the last council meeting of 2020.

Kelley, a former sales exec with HawaiianTropic, lives in Ormond Beach with his wife, Mary Margaret Kelley. The Kelleys have two grown children.

On Thursday, the council will swear in Kelley's successor, Jeffrey Brower of DeLeon Springs, who won the top elected post in the November elections over Deb Denys, who had been the district 3 council member since 2012. She had to resign at year's end because she ran for the chairmanship.

Denys' successor on the council is Danny Robins Robins who won the seat outright in a three-way primary in August with nearly 56 percent of the votes. Like Brower, he will be sworn in on Thursday.