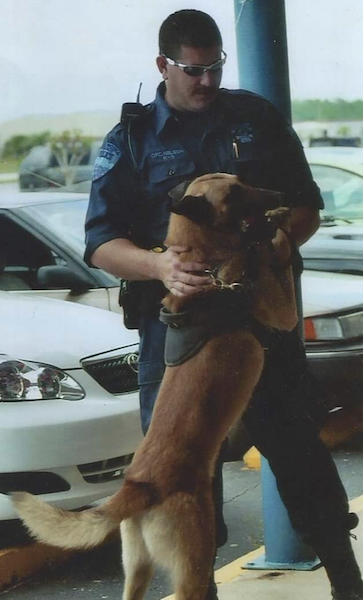 NEW SMYRNA BEACH, Fla. -- Today is a solemn anniversary for current and former cops for it is the 15th anniversary of the fatal crash that claimed the lives of New Smyrna Beach police officer Roy Nelson Jr. and his k-9 partner, Caesar.

Nelson and his canine partner, Caesar, were on duty that fateful day responding to a burglary call.

They were traveling on State Road A1A just east of the South Causeway when a pick-up truck pulled out from Richmond Drive. When Officer Nelson tried to avoid an impending collision, his patrol car hit a guardrail and overturned.

Nelson and Caesar both died from their injuries.

The driver of the truck left the scene of the crash, but he came forward two weeks later and the State Attorney's office declined to charge him.

Officer Nelson, 36, had served with the New Smyrna Beach Police Department for seven years. He was survived by his wife, Angie, and their two daughters, Samantha and Sabrina, then 15 and 4, respectively.

Nelson served as a bicycle officer, a member of the SWAT team, and for two years as a K-9 handler. He was known by fellow officers to be passionate about his work, especially with drug enforcement.

Nelson  was a member of Coronado Community United Methodist Church, was an avid fisherman and scuba diver, and enjoyed running on the beach and games of paint ball.

"Taken from this world way too soon!" Griffith wrote on his Facebook page.  "Miss you Roy!"

"Taken from this world way too soon!," Griffith wrote on his Facebook page.  "Miss you Roy!"

The New Smyrna Beach Police Department rembered Nelson and Caesar with this posting on its Facebook page today (along with a link to the Officer Down Memorial Page (https://www.odmp.org/…/17842-police-officer-roy-lundell-nel…) as follows:

**IN MEMORIAM** REMEMBERING K9 OFFICER ROY NELSON
Today, August 13, 2020, marks the 15th anniversary of the death of our fellow New Smyrna Beach Police Department Officer Roy Lundell Nelson Jr. and his K9 Partner "Caesar."
Roy and Caesar were killed in a traffic crash while responding to a burglary call on this day in 2005. It is with a heavy heart that we continue to remember his loss, but those who knew him also continue to cherish his memory.
Gone, but NEVER FORGOTTON !!
“It is foolish and wrong to mourn the men who died. Rather we should thank God that such men lived.” -- General George S. Patton

Veteran Edgewater cop Brian Gintz remembered his friend Roy Nelson Jr., posting a pic of him on his own Facebook page and writing, "Miss you my brother." 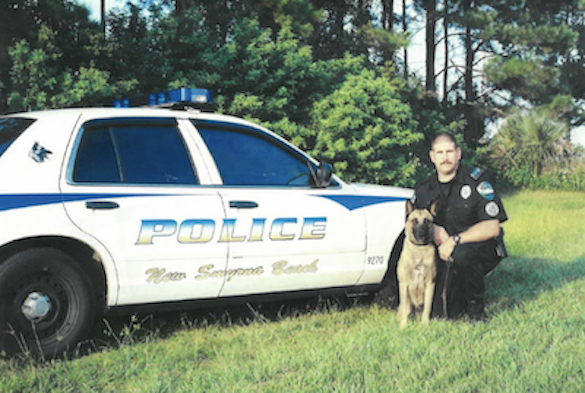 Veteran Edgewater cop Brian Gintz remembered his friend Roy Nelson Jr., posting a pic of him on his own Facebook page and writing, "Miss you my brother."

Henry Frederick is publisher of Headline Surfer, the award-winning 24/7 internet news outlet launched 12 years ago that serves greater Daytona Beach, Sanford & Orlando, Florida via HeadlineSurfer.com. Frederick has amassed more than a hundred journalism industry awards in print & online -- more than than all other members of the working press combined in Central Florida since the mid-1990s. He earned his Master of Arts in New Media Journalism with academic honors from Full Sail University in 2019. Having witnessed the execution of serial killer Aileen Wuornos in Florida's death chamber and other high profile cases, Frederick has appeared on national crime documentary programs on Discovery ID and Reelz for his investigative reporting and cops & courts breaking news stories.
Award-Winning Journalism of Henry Frederick.