Photos for Headline Surfer / A 5-foot-long rattler was spotted in the surf before coming on shore near Smyrna Beach Dunes on Friday. It was nudged away from people by a Volusia County Beach Safety officer as shown above. Bystanderts took snapshots with cell phones of the rare occurence. The inset photo was taken by Natalie Glen.

NEW SMYRNA BEACH, Fla. -- Already known as the shark bite capital of the world, New Smyrna Beach has another creature making headlines: a 5-foot-long rattle snake spotted in the surf.

A slithering snake was spotted in the waves off Smyrna Dunes, a park that leads to the beach near the South Jetty, where surfers love to ride the waves.

A Volusia County beach safety officer was able to move it away from bystanders. The snake eventually slithered away from human sight, but not before it was spotted by a child in the surf and thern bystanders who snapped photos with cell phones of it after coming ashore and slithering along the hard-packed sand. 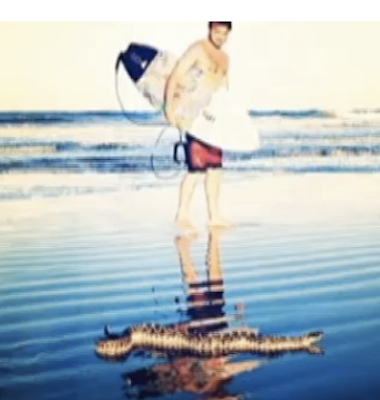 With cooler temperatures here in October, snakes like this become more active in the dunes, a part of their natural habitat, even as they avoid people as much as possible.

But with so many beach-goers gathered around Friday, this snake had no escape until it was nudged along its way back into the underbrush by the beach safety officer with a metal pole.

Valeh Levy, who shot a video of the snake used in news footage by WFTV Channel 9, told the Orlando TV station her son spotted it in the surf before it came on shore in an apparent attempt to reach the dunes.

"My son came running up toward my minivan and he said, 'Mommy, you're not going to believe this but there's a rattlesnake in the surf,'" Levy told WFTV's Blaine Tolison.

"My son came running up toward my minivan and he said, 'Mommy, you're not going to believe this but there's a rattlesnake in the surf,'" Levy told WFTV's Blaine Tolison.

Levy said her on described how surfers tried to avoid the snake swimming right by them: "He said the coolest part was that the snake raised half of its body up and looked out towards the surf and a wave was coming and the snake turned towards the beach and kind of let the wave bump it on in."

WFTV cited experts who told Tollison it's a rare occurrence like Friday's episode for people to see a snake, in this case an eastern diamondback rattler, in the surf, but a locale such as Smyrna Dunes Park is a natural habitat for them where they feast on rats, small rabbits and baby raccoons.

Rattle snakes have been known to bite people, but as Levy pointed out to WFTV, this rattler was trying to avoid human contact, moving away the nearby curious onlookers taking photos of the rare find. 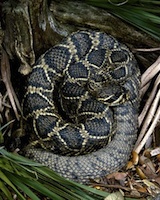 The eastern diamondback rattlesnake is the largest venomous snake in North America. Some reach 8 feet (2.4 meters) in length and weigh up to 10 pounds (4.5 kilograms). These stout-bodied pit vipers generally live in the dry, pine flatwoods, sandy woodlands, and coastal scrub habitats from southern North Carolina to Florida and west to Louisiana.

Their pattern of yellow-bordered, light-centered black diamonds makes them among the most strikingly adorned of all North American reptiles. They are natural exterminators, surviving on such household pests as rats and mice, as well as squirrels and birds.

Feared as deadly and aggressive, diamondbacks are actually highly averse to human contact and only attack in defense. Most bites occur when humans taunt or try to capture or kill a rattlesnake. They can accurately strike at up to one-third their body length. Diamondback venom is a potent hemotoxin that kills red blood cells and causes tissue damage. Bites are extremely painful and can be fatal to humans.

However, antivenom is widely available throughout the snake's range, and bites rarely result in death. When cornered, rattlers feverishly shake their iconic tails as a last warning to back off.

Rattles are made of loosely attached, hard, hollow segments. Snakes add a new rattle segment each time they shed. However, rattles break off frequently, and snakes may shed their skin several times a year, so it is not possible to determine a snake's age by its rattle size.

The eastern diamondback is not endangered, but because of indiscriminate killing, widespread loss of habitat, and hunting, its numbers are decreasing throughout its range.

Henry Frederick is publisher of Headline Surfer, the award-winning 24/7 internet news outlet launched 12 years ago that serves greater Daytona Beach, Sanford & Orlando, Florida via HeadlineSurfer.com. Frederick has amassed more than a hundred journalism industry awards in print & online -- more than than all other members of the working press combined in Central Florida since the mid-1990s. He earned his Master of Arts in New Media Journalism with academic honors from Full Sail University in 2019. Having witnessed the execution of serial killer Aileen Wuornos in Florida's death chamber and other high profile cases, Frederick has appeared on national crime documentary programs on Discovery ID and Reelz for his investigative reporting and cops & courts breaking news stories.
Award-Winning Journalism of Henry Frederick.