Photos for Headline Surfer / WWE Smackdown Women's Champion Sasha Banks is the Honorary Starter for the 63rd running of the Daytona 500 race from Daytona International Speedway in Daytona Beach, Florida.

She will waive the green flag on the Great American Race, which is set for a 2:30 p.m. ET (FOX, FOX Deportes, MRN Radio and SiriusXM NASCAR Radio) start at the 2.5-mile World Center of Racing from Daytona.

“I am honored to be the official starter of the Daytona 500," Banks said. "I would like to thank NASCAR and our partners at FOX for this opportunity. I can’t wait to get out to the track in front of the great fans and find out which driver has what it takes to be a ‘Legit Boss’.” 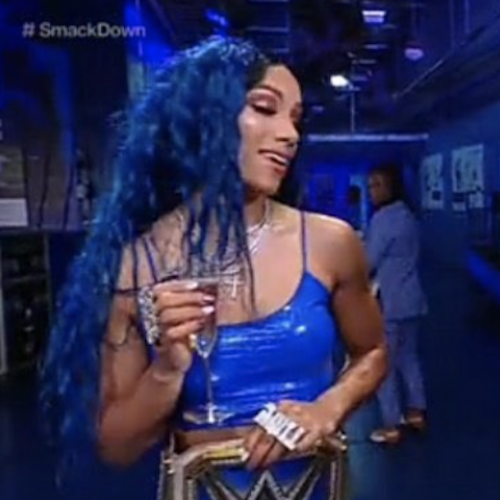 “I am honored to be the official starter of the Daytona 500," Banks said. "I would like to thank NASCAR and our partners at FOX for this opportunity. I can’t wait to get out to the track in front of the great fans and find out which driver has what it takes to be a ‘Legit Boss’.”

Banks can be seen each week on Friday Night SmackDown, which airs live every Friday night on FOX.

As a pioneer of the WWE Women’s Division, Banks has continuously broken down barriers and shattered glass ceilings, helping usher in WWE’s current Women’s Evolution.

Speedway officials are thrilled Banks will be waving the green flag to start the race.

“The tradition of having high-profile athletes, including those from WWE, as part of the Great American Race continues this year with Sasha Banks as our honorary starter, and we couldn’t be more excited,” Daytona International Speedway President Chip Wile said. “She is a true champion, and I know our fans will be anxious to see her drop the green flag on the historical 63rd Daytona 500.”

Banks’ appearance at the Daytona 500 marks the second consecutive year that a WWE Superstar has been a part of pre-race ceremonies.

In 2020, Sheamus was the honorary pace car Driver.

Daytona International Speedway has a long history of professional athletes being involved in official capacities at the Daytona 500, dating to 1977 when then-Oakland Raiders quarterback Ken Stabler was the Honorary Starter.

Daytona Speedweeks:
For a schedule of on-track activities and protocols, logo onto www.DAYTONA500.com. Fans can stay connected with Daytona International Speedway on Twitter, Facebook and Instagram for the latest speedway news.
About The Byline Writer: