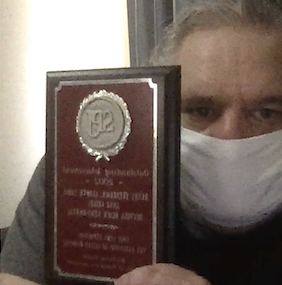 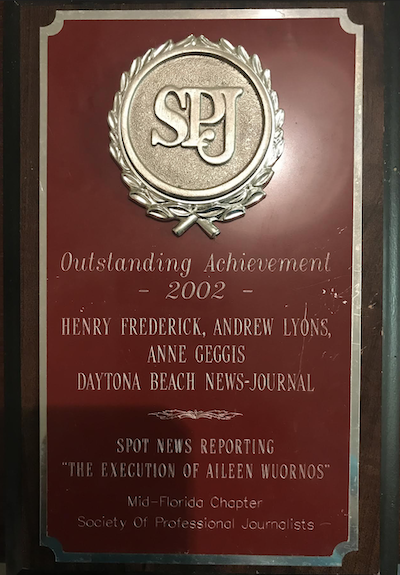 DAYTONA BEACH,Fla. -- I came across a journalism-industry award in our storage unit earlier today while looking for something else for my wife Sera when a flood of memories came rushing back from back in the day when I  witnessed and reported on the execution of famed serial killer Aileen Wuornos in Florida's death chamber on Oct. 9, 2002.

More on that in a minute, but first the need for a storage unit: There are three things that I treasure that if allowed in our cozy 1BR apartment would be  yhe ultimate case of hoarding: Thousands of newspaper tearsheets, dozens and dozens of journalism plagues (the one mentioned here was mistakenly in an unmarked box with some of Sera's stuff) and several thousand of music albums - mostly from the '70s and '80s.

Now back to the award on the coverage of Wuornos: Two other then-reporters with the Daytona Beach News-Journal listed on the award with yours truly were assigned sidebar stories to accompany the main story assigned to me. A sidebar feature by Andrew Lyons from the Last Resort Bar in greater Daytona where Wuornos often hung out; and a sidebar from Anne Geggis interviewing death penalty protestors outside the main prison gates at Starke maximum security prison where state executions are carried out.

I was among a half dozen reporters from across the Sunshine State bussed from the main prison at Starke to the Death Chamber futher within the sprawling maximum security prison campus. A second Central Florida reporter there as well was Clare Metz of WESH Ch. 2 Orlando.

It was there in the death chamber that Wuornos'execution by lethal injection was carried out once the "witnesses" were seated in a small room on the other side of a large window looking into the death chamber.

Besides the reporters were a few relatives from several of Wuornos' murder victims as well as then-Circuit Judge R. Michael Hutcheson and then-State Attorney John Tanner...

In the weeks leading up to her execution, one of her attorneys persuaded Gov. Bush to order a temporary stay of execution, pending one more psychiatric exam. The results were convincing to the governor that Wuornos understood the nature of the crimes committed and the sentence and lifted the stay.

Then came the date with death -- Oct. 9, 2002. I sat in the third row of a cramped viewing room with a white curtain covering a large glass window into the death chamber. And I was seated directly behind Hutcheson and Tanner.

We were there for what seemed like an eternity, but in reality was a couple of minutes before the curtain was opened from the other side of the glass and there was Wuornos strapped onto the gurney with leather restraints just below her collar bone and across to her arms, her waist, thighs and ankles. The poisonous needles were already in her left arm on the same side as the window.

She was asked if she wanted to say any final words: "Yes," she responded. "I would just like to say I'm sailing with the rock, and I'll be back, like Independence Day with Jesus. June 6, like the movie. Big mother ship and all, I'll be back. I'll be back."

The rock is a biblical reference.

Then came the pressing of buttons to release the poisons into her. She stared straight up at the ceiling, swallowing incessantly, her eyes watering, but she wasn't emotional.

As the first few minutes passed, I couldn't help but hear the humming noise from a small air conditioner sticking out from the wall opposite wall doorway. Of the dozen or so witnesses, not one word was spoken. Nobody cried, sighed, coughed or sneezed.

I was staring intently at Wuornos' upper body when I saw that she had stopped breathing. While her skin began to turn pale in her now lifeless body, the backs of the necks of Judge Hutcheson and State Attorney Tanner turned red, as if their blood was boiling. It was hot in that room.

After about eight minutes or so, the attending physician nodded when the warden asked if she had expired. He then picked up a phone, presumably to the governor. None of us could hear his words because the audio system was deactivated after Wuornos spoke. The warden then nodded to one of the guards and the curtain was drawn closed. Aileen Wuornos was dead at the age of 46. 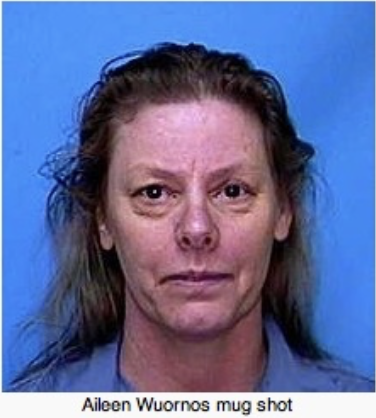 I was staring intently at Wuornos' upper body when I saw that she had stopped breathing. While her skin began to turn pale in her now lifeless body, the backs of the necks of Judge Hutcheson and State Attorney Tanner turned red, as if their blood was boiling. It was hot in that room.

After about eight minutes or so, the attending physician nodded when the warden asked if she had expired. He then picked up a phone, presumably to the governor. None of us could hear his words because the audio system was deactivated after Wuornos spoke. The warden then nodded to one of the guards and the curtain was drawn closed. Aileen Wuornos was dead at the age of 46.

We were immediately escorted out to a waiting bus to take us back to the main prison parking lot. I remember Claire Metz and I comparing notes to make sure we were accurate in what Wuornos said. And we were.

Ironically, one reporter missed the bus, and as a result, the execution altogether. Then I did what I do best: I went into overdrive on my laptop and cranked out the story. It was sent by e-mail (the Internet was far less advanced back then as far as a writing and delivery tool). My story was the first to hit the AP.

For an honest day's work, I was later given a breaking news award from the Society of Professional Journalists, Florida Chapter with the headline, "The execution of Aileen Wuornos." That is the red-colored plaque I came across today.

In the years since, my name has been mentioned in several published books by authors from Europe and three years ago, a film crew came to my house in New Smyrna Beach for an on-camera interview that became part of an episode in a documentary TV show called "Twisted" that aired in 2010, and is available on DVD. I never watched it.

For that matter, I never watched the 2003 movie "Monster" with Charlise Theron playing Aileen Wuornos, for which she won an Academy Award for best actress.

A couple of years ago, I was interviewed by a camera crew from Texas for a documentary special on Wuornos execution' that aired on the cable outlet Reez. I haven't see that one weither since we don't get Reelz. Several friends on Facebook told me they had seen it and that they felt I did a great job in providing analysis on the life and death of Wuornos and other  prominent serial killers such as Ted Bundy.

I plan on writing my own book on Wuornos and my thoughts on the death penalty. It's one of three books in the works for publication over the next couple of years of years.

The life and death of Aileen Wuornos is a story told many times over with lots of cliches and cheap catchphrases. But being there along the way is a story worth telling upon greater reflection and with the passage of time.

More on the books later.