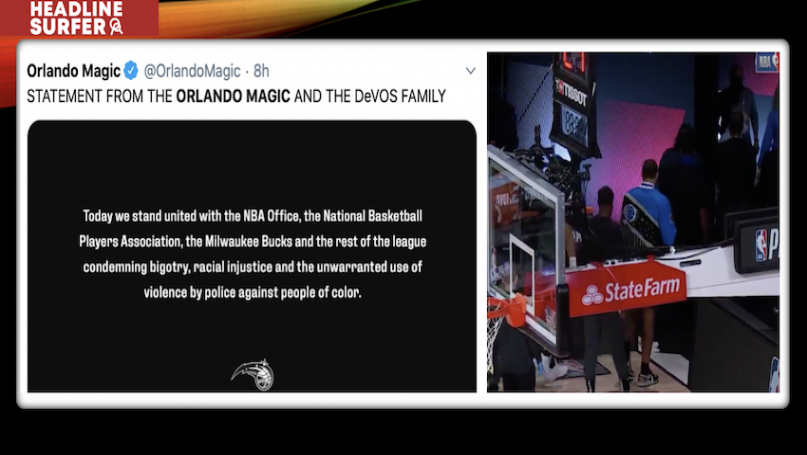 Headline Surfer photo illustration / Above: The Orlando Magic organization posted a tweet in support of the Milwaukeee Bucks after the No. 1 seeded team in the Eastern Conference playoffs refused to play the Orlando Magic Wednesday in The Bubble in response to the police-involved shooting of a Black man, Jacob Blake, in Wisconsin by cops. Top Right: Magic players leave the court after the Bucks refuse to take the court for game 5 of the best of seven series with Milwaukee holding a 3-1 series lead.

LAKE BUENA VISTA, Fla. -- Game 5 of the first-round of NBA playoffs between the Orlando Magic and the Milwaukee Bucks was called off Wednesday when the Bucks players refused to leave the locker-room area in protest to the near-fatal shooting of a Black man, Jacob Blake, over the weekend, by a white cop in Kenosha, Wisc.

The NBA post[pned a slate of playoff games Wednesday and today.

The Orlando Magic and the DeVos family, who own the team, released a statement supporting the decision to postpone NBA games.

“Today we stand united with the NBA Office, the National Basketball Players Association, the Milwaukee Bucks and the rest of the league condemning bigotry, racial injustice and the unwarranted use of violence by police against people of color,” the Magic statement read.

Magic players said they wished they had received a head's up from the Bucks, but nonetheless were in support of the stance taken.

“We weren’t given advanced notice about the decision, but we are happy to stand in solidarity with Milwaukee, Jacob and the entire NBA community," Magic guard Michael Carter-Williams said in a statement released by the Magic, adding, "Change is coming,”