Headline Surfer Photo illustration / Above main pic: Roman Reigns reigns supreme in WWE by prevailing in the headlining triple threat match over Edge and Daniel Bryan for his Universal Heavyweight belt on the second of two nights at Wrestlemania 37 at Raymond James Stadium in Tampa, Florida. In the Top inset: Reigns is shown flexing before his match in front of the Wrestlemania banner logo. In the Bottom left inset: Liv Morgan of the Riot Squad is shown outside the ropes waiting for a tag from Ruby Riott in the Women's Tag Team Turmoil match. The Riott Squad would go on to lose to Natalya and Tamina in the final elimination match. Bottom left inset: Bianca Belair is shown with a stunned look on her face after defeating Sasha Banks by pinfall to become the new WWE Raw Women's Champion.

TAMPA, Fla. -- Due to the ongoing coronavirus pandemic, the WWE was forced to hold its marquee pay-per-view event, Wrestlemania, over the past two nights with Roman Reigns retaining his Universal championship in a triple threat match over Edge and Daniel Bryan to close out the show Sunday night at Raymond James Stadium.

Perhaps the most shocking matchup came at the close of the first night that saw Bianca Bellair defeat Sasha Banks to become the new Raw women's champion.

Here is a breakdown of the 14 matches at Wrestlemania 37 over the two nights:

• Singles match -- Randy Orton defeated The Fiend (with Alexa Bliss) by pinfall in 5:50.

In that main event, Roman Reigns successfully defended the Universal Championship against Edge and Daniel Bryan, thanks in part to interference by Jey Uso who attacked both Edge and Bryan with superkicks.

In the closing moments, Uso attacked Edge. After Edge performed a Spear on Uso, Reigns intercepted Edge with his own Spear. Reigns then performed the Con-Chair-To on Edge and then laid Edge's body across Bryan's and pinned both at the same time to retain his Universal championship belt.

In the opening night's main event, Bianca Belair attempted a 450 Splash on Banks, but she raised her knees to block the maneuver. As Banks applied the Bank Statement, Belair reached the ropes and the referee called off the submission.

Belair eventually performed her 450 splash on Banks for a near-fall. In the closing moments of the match, Belair became more aggressive and whipped Banks with her long ponytail before performing a Kiss of Death on Banks to win the Raw Women's championship belt.

Wrestlemania 37 was originally scheduled to take place on March 28, 2021, at SoFi Stadium in Inglewood, Calif. But due to COVID-19 restrictions in California, WWE rescheduled and moved the event to Raymond James Stadium in Tampa, which was the originally planned venue for WrestleMania 36 before the pandemic forced the event to be relocated and held behind closed doors at the WWE Performance Center in Orlando.

In August 2020, Florida loosened its COVID-19 restrictions. As a result, the event marked the first time WWE had ticketed fans in attendance for an event during the COVID-19 pandemic.

With a limited capacity, WWE claimed to have sold out of all available tickets and had an attendance of 25,675 spectators for each night of Wrestlemania 37. 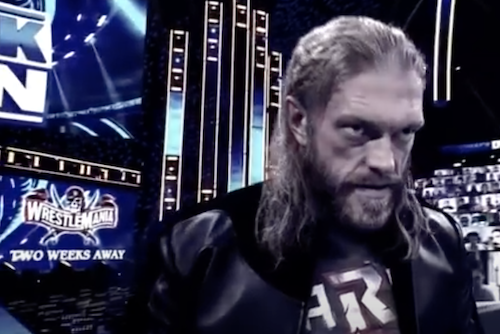