SCSO: Woman charged with manslaughter in shooting death of boyfriend on Muddy Lane in Sanford 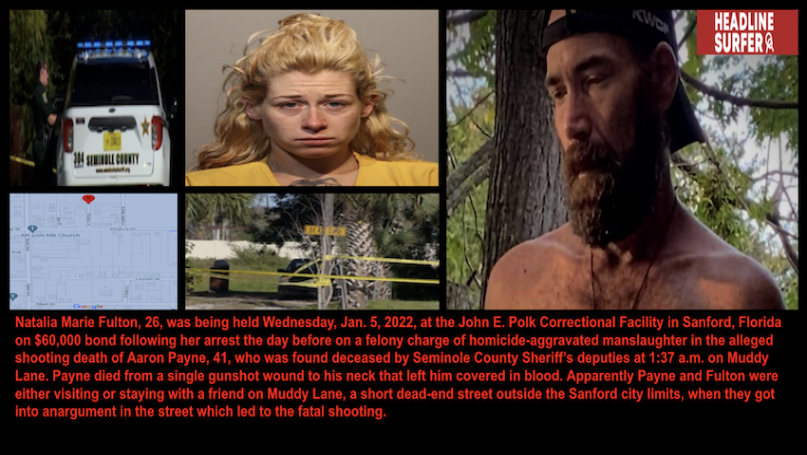 SANFORD, Fla -- Residents were wakened shortly after 1:30 in the morning to an argument between two people and then a gunshot sound on tiny dead-end Muddy Lane leading to the arrest of a 26-year old woman whose older boyfriend lay dead in a pool of his own blood from a gunshot wound to the neck.

Natalia Marie Fulton, 26, whose last known address is in Orlando, saw her no-bond status changed to $60,000 bond earlier today in her first court appearance on a third-degree felony charge of homicide-aggravated manslaughter, which could land her in prison for up to 15 years if convicted in a court of law.

The victim, 41-year-old Aaron Payne, no known address, but originally from Sanford, was pronounced dead at the scene in the 2000 block of Muddy Lane opposite the entrance with Hughey just north of Sanford-Orlando International Airport.

Here is a synopsis as to what occurred: At 1:37 a.m. Tuesday, Seminole County Sherriff's Office deputies responded to a 9-1-1 call on Muddy Lane in reference to an argument between a man and a woman and the sound of gunfire.

Responding deputies found a bloodied man lying prone on the street. He was unresponsive and was pronounced "no codes or vitals" at 01:45 a.m. by Seminole County Fire and Rescue. The dead man was later identified as Aaron Payne, 41.

While on the scene, deputies spoke with several witnesses who stated they all heard a verbal altercation occurring in the roadway on Muddy Lane.

During the altercation, Aaron Payne and Natalia Marie Fulton were identified as the only two people involved in a heated argument. A single gunshot was heard, and witnesses stated after the gunshot they saw Fulton leaning over Aaron Payne and rummaging through the bags next to him while he was on the ground. Fulton was subsequently seen running into an open field while Payne remained motionless on the ground.

Several attempts were made to locate Fulton without success until she was finally located walking in the area of Kings Road and Sipes Avenue and taken into custody "based on the probable cause that Natalia Marie Fulton intentionally committed an act that caused the death of Aaron Payne."

Fulton was arrested and charged with manslaughter.

During an interrogation at the Seminole County Sheriff's Office in Sanford, Fulton, after being read her Miranda Rights, voluntarily admitted she had verbally sparred with Payne because he was trying to leave with some of her personal belongings in a backpack.

Fulton told deputies she tried to get Payne to stay and talk about their relationship, but Payne refused and rammed his bicycle into her.

While attempting to stop him, Fulton grabbed a bag off of Payne’s shoulder, which fell to the ground. Fulton then picked up what she thought was a BB gun and pointed it at Payne. Fulton later told deputies she realized the weight was consistent with that of a real handgun but didn’t stop pointing the weapon because she wanted to scare Payne.

While attempting to stop him, Fulton grabbed a bag off of Payne’s shoulder, which fell to the ground. Fulton then picked up what she thought was a BB gun and pointed it at Payne. Fulton later told deputies she realized the weight was consistent with that of a real handgun but didn’t stop pointing the weapon because she wanted to scare Payne.

Payne moved his bike toward Fulton, causing her to fire at him, she told investigators. Fulton told deputies she checked on him and saw the gunshot wound to his neck, and overcome with fear, ran off with the gun in hand to a nearby open field and beyond where she was apprehended by deputies.

Apparently, neither of them lived on Muddy Lane, but were either staying with or visiting a friend who lived on the short dead-end road, a mutual friend told Headline Surfert on condition of anonymity.

The Seminole County Sheriff's incident report was not clear as to why Patne and Fulton were there, to begin with.