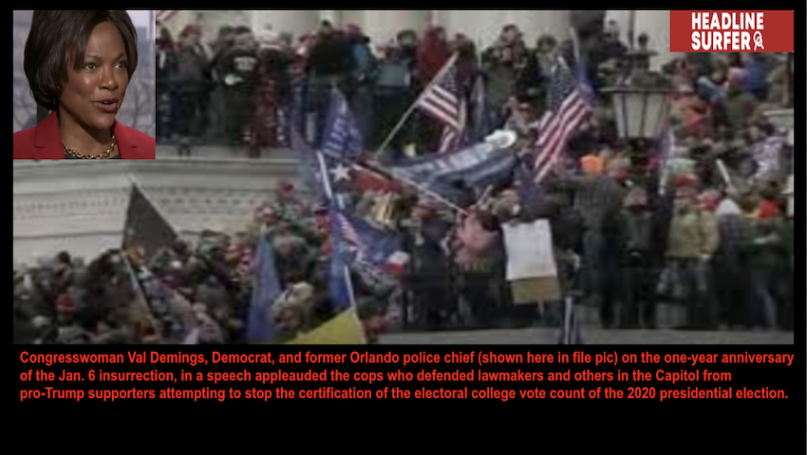 ORLANDO, Fla. -- Democratic Rep. Val Demings, a former Orlando police chief, police chief, honored officers who defended the US Capitol on Jan. 6, 2021, in her remarks from Capitol Hill on the one-year anniversary:

"As a former police chief, I shall never forget what I witnessed one year ago today," Demings said. "And America should never forget either. I know the Capitol police officers and others took their oath seriously because I saw them fighting with every ounce of strength, courage, commitment, and energy that they could muster up."

Demings also spoke of the difference between the bravery of the cops under siege and the behavior of some Republican member sof Congress loyal to Donald Trump and his Big Lie:

"As members of Congress, both in the upper chamber and the lower chamber, we have taken an oath, too. But some have forgotten that oath. Some, the oath is overshadowed by their quest for power and their pathetic fear of election officials counting every vote." Demings said. "I want to thank the police officers for defending and protecting us that day, but they did so much more. They also protected our democracy. Many people call themselves patriots, but true patriots don't lie. They don't steal. They don't cheat. They aren't cowards. They don't push lies for political or financial gain. But out of the ashes, good things can rise."

Demings added, "The bright spots one year ago today, the police officers who defended us and the certification of the electoral ballots. Our democracy stood, and the enemies of our democracy lost. I will support, protect, and defend because America is worth it."