DAYTONA BEACH, Fla. -- Dubbed "America's Hometown - the City of Eustis in Lake County got a new top cop back in March and he's among the very best law enforcement has to offer in the Sunshine State.

This results-driven law enforcement leader is Craig Capri, who in three short years as chief of the Daytona Beach Police Department brought this tourism hub back to respectability with significant reductions in violent crime.

It didn't take long for Capri's brand of law enforcement leadership for the cops to buy into his management style - that of a foot patrol rookie cop 30 years earlier who interacted with citizens and merchants alike - when he took over as the interim chief in November 2016 and sworn in as permanent chief in January 2017.

Capri was forced to retire this past October because he was in the state's early retirement system and in recent weeks been working as an investigator with the State Attorney's Office. But he resigned from the SAO when informed by Eustis City Manager Ron Neibert that the job of police chief was his if he wanted it.

Capri, who was among 80 applicants in a nationwide search, accepted the top leadership position in Eustis, having started on April 5.

Capri replaced Gary Calhoun, who resigned earlier in the year. He was chosen from more than 75 applicants during a nationwide search.

Eustis City Manager Ron Neibert said Capri's experience in specialized patrol, investigations, drug operations, and special response situations easily made him the ideal hire, at a salary of $110,000 and overseeing the police force with 41 sworn officers. Capri made $171,000 in Daytona and commanded 248 cops.

“I am pleased to add a highly-qualified law enforcement professional to the city’s leadership team,” Neibert said. “Chief Capri has the necessary experience and attitude to make a positive impact upon the Eustis Police Department and the city as a whole.”

For his part, Capri, 53, and a father of three told Headline Surfer he was grateful for the opportunity to lead a municipal police force again.

“It’s a huge responsibility and I don’t take it lightly,” Capri said. “I have to make decisions that will impact the community and the officers I will be working with.”

For his part, Craig Capri, 53, and father of three, told Headline Surfer he was grateful for the opportunity to lead a municipal police force again. “It’s a huge responsibility and I don’t take it lightly,” Capri said. “I have to make decisions that will impact the community and the officers I will be working with.”

While growing up in Wallington, NJ, Capri said his dream was to be a cop. Having moved to Florida as a young adult, Capri attended the police academy at Daytona Community College, now Daytona State College, and started with the Daytona Beach Police Department in 1990. 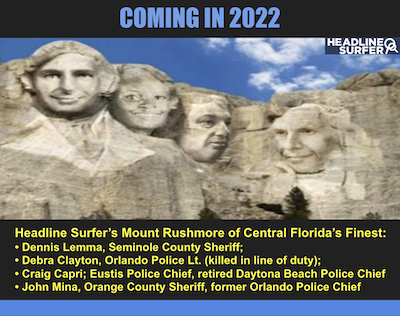 Over the next three decades, Capri moved up the ranks from a police officer to detective, team member for the Special Response Team, sergeant, lieutenant, SWAT team commander, captain, and deputy chief of police. From 2017 to 2020, he was Daytona Beach's chief of police, replacing Mike Chitwood, who had been at the helm for a decade, before Chitwood resigned in 2016 to successfully campaign for elected sheriff of Volusia County.

Capri's retirement from the DBPD at the end of 2020, paved the way for 42-year-old Jakari Young to move up to police chief.

Young is now the 17th police chief to serve in Daytona Beach over the past century and he's the tourism-driven city's first Black chief of police.