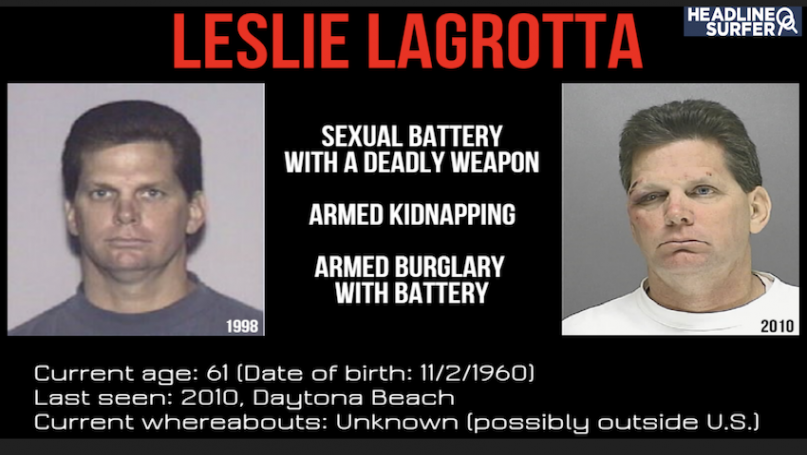 Photos for Headline Surfer / With a cash reward of $25,000, Volusia County Sheriff Mike Chitwood and Orlando Police Chief Orlando Rolón are banking on someone out there leading cops to a seedy low-life whose female victims have suffered for two decades or more.

ORLANDO, Fla. -- Volusia County Sheriff Mike Chitwood and Orlando Police Chief Orlando Rolón agreed in mid-December to pool resources in an effort to take down violent serial rape suspect Leslie Lagrotta, who is wanted in a series of sexual batteries in Orlando and greater Daytona Beach from 1988 to 1998.

A $25,000 reward has been put up by Chitwood through the VCSO to encourage victims to come forward with information leading to the arrest of Lagrotta.

This then would empower Rolón's highly-skilled detectives in DNA to see to it that Lagrotta, perhaps Central Florida's most notorious serial rapist (allegedly) back in the day would have his day in court before he's put behind bars until he drops dead.

LaGrotta has been in hiding for at least a decade now but believed to be in the muck of rural fringes far enough from the bright lights of tourism-driven Orlando and its affluent suburban suburbs that he's managed to keep himself far enough from the long arm of the law to exist, though, with the sizable cash reward, the thinking is someone will try and cash in at his expense, ultimately his very freedom which is no fun in the sun at Disney.

After all, his very existence has to be tempered by money that doesn't grow on orange mangroves and swamp brush, at least that is how law enforcement sees it.

DNA evidence and thorough police work can link Lagrotta to the rapes with a fraction of DNA evidence to make a match.

Apprehending him now would be far more fruitful in linking him to his victims from back in the day, including alleged rapes at knifepoint the two top cops insisted in a Q&A with several Orlando news reporters.

"Technology in matching DNA samples and great detective work" are difference makers Rolón stressed, adding it would take a minuscule sample of Lagrotta's DNA now with a fraction of his DNA that couldn't be matched up then.

Chitwood ever so blunt was quick to add, "You can't outrun your DNA."

But the key to closing out these cases for women who have endured the emotional trauma in their own homes with no escape from his alleged brutality.

“Pick up the phone, let us know where he’s at, so we can work with OPD and bring this scumbag to justice!” Chitwood said emphatically to his infamous one-word adjective condemning those he detests. “We owe it to these women.” 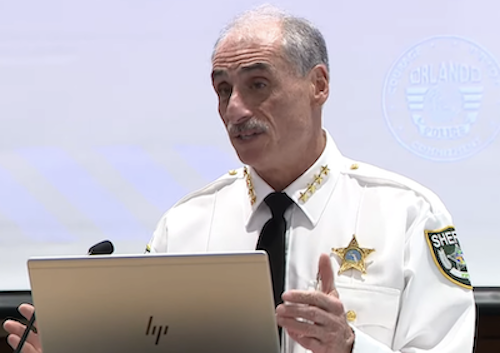 “Pick up the phone, let us know where he’s at, so we can work with OPD and bring this scumbag to justice!” Chitwood said emphatically to his infamous one-word adjective condemning those he detests. “We owe it to these women.”

Anyone with information about Leslie Lagrotta, or who has heard from him, is encouraged to reach out anonymously to Crimeline at 1-800-423-TIPS (8477) or crimeline.org.